Termez. The mystery of medieval city

The mystery of medieval city

This ancient city is just one of the locations on the legendary Silk Road. From here the camel caravans followed on the desert often up to seven days to get to Termez. Today it is possible to overcome the distance by train in just a few hours.

On the one hand, the city is rich in a variety of retail outlets, enchanting shops and also the big bazaars with the aroma of spices, beautiful fabrics and the most delicious cuisine.

The pages of history

According to the legend, the founder of Termez is the first king of Bactria - Zoroaster.

The first name of Termez, at which he entered the history of the world, was Taramastha or Taramata, which translated to a Bactrian is "river." In ancient times there was an important crossing on the river Amu Darya. Date of the founding of the city of Old Termez, located a few kilometers easter of the modern city is not known. Even the Iranian Achaemenid won these seats in the VI century BC, had already called the ancient city of Termez.

The spirit and the cultural aura of Termez formed over the centuries.

In the era of the Kushan Empire in the vicinity of Termez began construction of a Buddhist monastic complex of Kara Tepe (Black Hill).

The complex is located at the three vertices of a gently sloping hill of clay and consisted of a large number of monasteries, each was intended for the 3-5 Monks. There is a square area in the center of which would be building to house relics. The monastery was surrounded by a fenced wall and outbuildings.

The decoration of the monastery consisted of a red and white stucco, ornamental painting, scene painting and sculpture. All this came to us only in minor fragments. In the caves found walled rooms that can serve as a place of burial. But to whom and when - is unknown. Archeologists proved that some space is still not detected by specialists.

Currently Buddhist complex Kara Tepe is located on the banks of the Amu-Darya River on the border of Uzbekistan and Afghanistan. 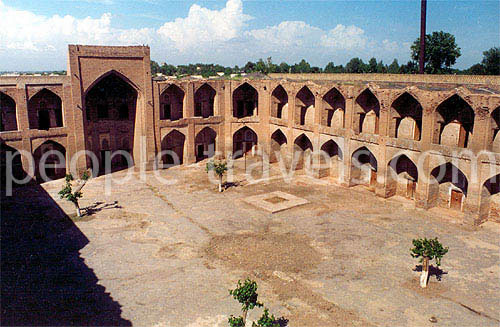 Sightseeing in Termez. The places of inimitable splendor

You will be stunned by its incredible ancient buildings of Termez. The arches of portals that decorated with beautiful marble could steal your heart and make a deep impression taking you back in time. Breathtaking impression of the beautiful historical places could charm you. All these different patterns, majolica of architectural monuments are all unique and priceless bewitching every visitor.