Sartepa was an ancient powerful, well-preserved city with semi-circular towers that is located not far from the Old Termez. In the II century, BC here was the big commercial city. The surrounding walls were reaching 9 feet. Moreover, inside it was equipped with anarch width of about 3 meters.

In the middle of the eastern and western defensive walls were made gates, over which hung menacing watchtowers. Inside the towers had a room for the guards. Between the city gates cut through the central highway built residential houses, which lay perfectly visible after the excavation. In the north-east of the settlement ruins of the citadel a height of about 14 meters, separated from the city moat, but in the south-eastern part, on a hill - the remains of the palace buildings. 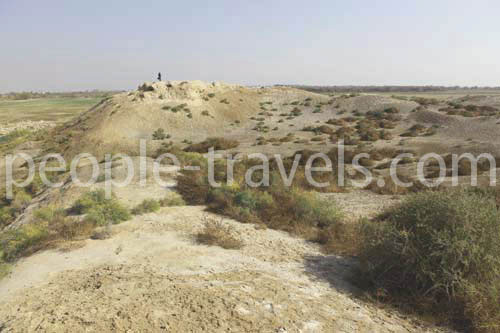 Here were found the fragments of statues, covered with red paint or gold plated. Archaeologists have discovered a Buddhist chapel built directly on the defensive wall. However, by the time of this chapel fortification, according to researchers, has declined. It was built housing and economic complex consisting of several buildings. In one of them, which served as a chapel. The ceiling was made of wood.

And for the eastern ramparts, 250 meters away, a slight sloping mound was excavated Stupa. Its lower part is composed of pakhsa, on top of which was a clutch of mud-brick. The platform on which stood a stupa, reaches a height of about 2 meters. On the south side it led a broad staircase. The platform is the stupa drum diameter of 6 meters and the height of the stupa, oriented to the cardinal, was originally more than 7 meters.

Hill fort Sartepa several times destroyed and rebuilt again. Archaeologists have opened a five-meter cultural layer and counted four periods of the city's history. The last time it was inhabited in the early Middle Ages, but after the conquest of Bactria-Tokharistan Arab fort was finally abandoned people.