Southern city of Uzbekistan that is located in Surkhandarya - Termez is remarkable for diversity of architectural structures. Being in this city it is worth visiting sacred mausoleum of Hakim al- Termezi, memorial complex of Sultan Saodat, Minaret Zharkurgan and Kokildor Ota Khanaka.

It is one of the most important and revered attractions Termez. Khanaka has its unusual architecture and unique layout. Here is dome-shaped structure Multiroom and the front of which was finished brick.

During its construction was repeated three-tiered idea of open front facade, which was used in conjunction Sultan Saodat. The building plan was symmetrical. 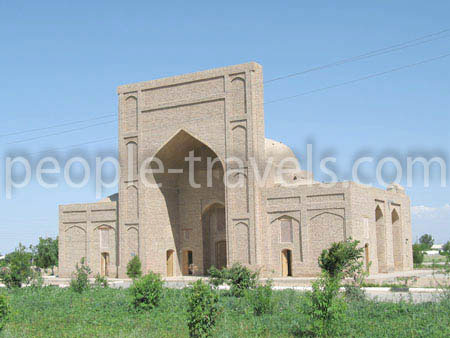 Khanaka is located on the central axis of the deep terrace of the main entrance and a large hall with a dome. On the sides, almost parallel there is arranged mirror room. Rectangular entrance led into the central hall and side entrances lead to adjacent rooms and corridors.

Walls of the building were decorated with gorgeous patterns of Gancia. In the inner room of the tombstones lie, the biggest of them belongs to the holy Kokildor Ota, after whom the complex was built.

Sublime Portal building is more typical for the XV century, for Temurid period than architecture of Mavara in the XVI century. The researchers suggest that it was again restored in Temurid period, possibly in the period of reconstruction of Hakim al - Sultan and Termezi Saodat.