This ancient settlement is located near Termez in Surkhandarya region. The attention of archaeologists was attracted during excavations that uncovered the biggest hill ruins of the ancient palace building dated 1st century BC.

Development of cities and settlements was impossible without the trade relations and cooperation with other cultural and economic centers of the ancient Termez. Therefore, scientists have tried to understand how it happened - what technologies were used by ancient inhabitants of this region.

Residents of cities and suburbs were engaged in agriculture, grown grain. Here were found 14 millstones, and the adjacent premises for the storage of flour. Here was also developed flour production. Collected glazed ceramics of dark blue color indicates that here was a life of the settlement at the end of III - IV centuries BC. At a depth of 30 centimeters detected surface lined with burnt brick rubble. 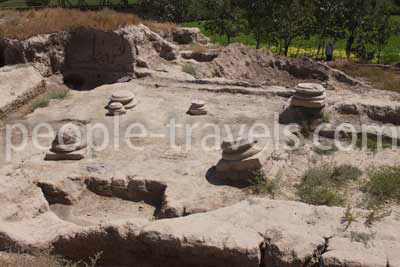 In the center of the masonry there is a large vessel – hum that was buried more than three-quarters in the ground. Despite the fact that its main buildings were severely eroded, archaeologists are still restoring bit by bit image this unknown settlement. Its area composed of six hectares.

Most of the constructions were built with adobe. In the center there was a tandir (universal oven used for cooking and heating), which was mounted in sufu - couch. It was made of mud brick, and the space between the walls was filled with soil. 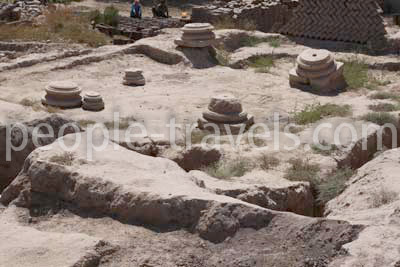 Here was also found a fortress of a ruler. The palace had a lot of rooms and corridors. Over time, the original purpose of the palace as the residence of the governor changed and it became, according to some scholars, the "house of deification of ancestors."

Three large doorways led through aivan to high main hall, from which you could walk into a small room with two columns - perhaps the sanctuary. The columns were made of wood, but the base on which they rest, carved out of stone and looked like the base of ancient columns.

Khalchayan hillfort is not yet fully understood, but it is already clear that it is an outstanding phenomenon.