Karatepa and Fayastepa are ancient citadels situated in hill and considered as the most ancient fortification in the territory of Uzbekistan. These sights are located in the northern part of Termez. Temples are the most ancient cave monasteries of Buddhism era.

In 1936 were conducted the first archaeologic research and as a result it became clear that  ancient layers of hidden cave temple complex with the monastery dates as the end of the first century. 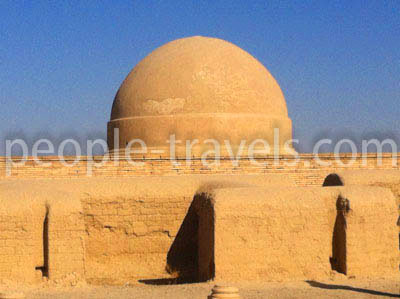 On the walls can be found niches for statues, ceramic vessels from Bactria, India, and Persia etc. The monastery and surface structures were made with square brick. And courtyard was surrounded by ayvan sand wooden columns on which there were only magnificent stone base.

The basis of these buildings were made with unique decorations and sculptures of the Budda. It connects with a yard encircled along perimeter with columns supporting a wooden roof, traces of which remained to these days. 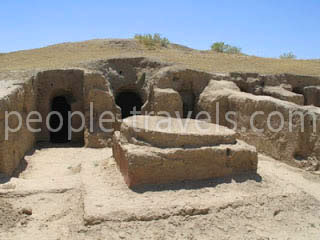 In the northern part of the stupa has been revealed during excavations of a cache is used to store relics. It found jewelry, a piece of cotton fabric and ceramic pot, which served, apparently, with a capacity for incense. Here were found more than five hundred gold coins minted during the last Kushan kings. As researchers have identified, stupa and chapel on the ramparts were built at the same time, in the III century.

Inside the complex can be found a small stupa, whose dome with the reliquary and the hole for the symbolic “umbrella of honour” once crowning that are still in good condition.