The historical evidence of three millennia

Kampyrtepa is a fortress that grows roots into the IV century BC, located on the banks of the Amu Darya, 30 km from Termez.

For the first time in the world archeologists managed to open the upper horizon of the entire layout of the Kushan fort, to reveal a complete picture of the total original building, the terraces, the citadel and the "lower city" with 11 blocks. 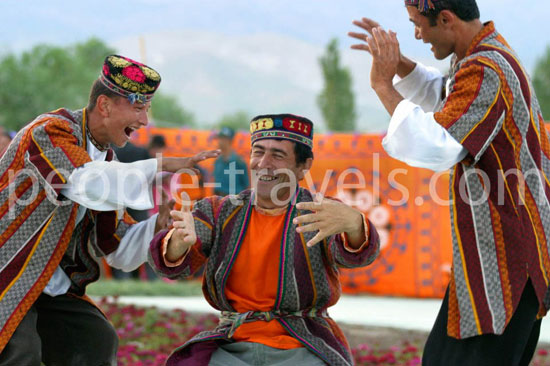 Here you will see the street riddled with sections and residential premises, building of commercial and religious purposes, their fortifications with towers and suburban buildings - the pier, ceramic kilns "Margianian" type, burial structures, including the "kata" as referred to in Vide date Avesta. Many of them are fully excavated.

Exceptional scientific interest are found only here in the world of Bactrian Kushan manuscript II century AD, made with black ink on papyrus, as well as fragments of the vessel walls with slogans and Bactrian Greek III-II centuries BC with weights and measures volume, single words, ancient inscriptions on ancient Kharoshti that were made on the alignment of the gate of brick citadel. 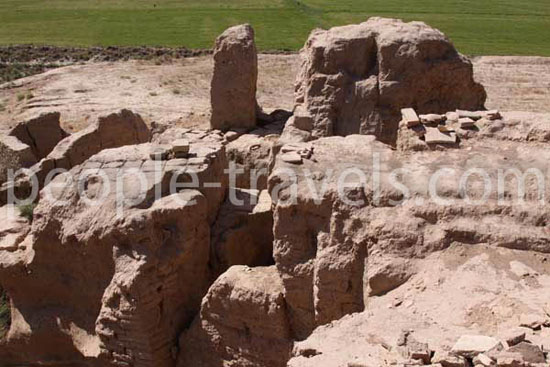 Numerous findings of numismatic evidence about the functions of the fortress were not only for trade, but also the destination customs. Among them: Seleucid, Greco-Bactrian and hundreds of coins, including the treasures of the Kushan kings - Soter Megas, Kadfiz II and Kanishka, Huvishka, and such as the discovery of a unique phenomenon on the floors of some of them - coins of Parthian rulers, as evidence of their temporary protectorate.

It is very impressive to find here unique antique pieces of small plastic: terracotta holy pictures, plaques, figurines flute (with vertical and horizontal wind instruments, a multilateral Pan Searing). Here were also excavated images of different characters such as warrior in armor with shields and swords, musicians and satyrs sileni , naked and clothed gods and goddesses, the divine couple, sitting Buddha, matrix for reprint images of Anahita. The scientists were also found the head of Greco-Bactrian ruler, the wooden sculpture of male Bactrian in a conical hat, coat and draped shalwar kameez, the fallen rider in the same suit, "Parthian" like a brass buckle at the scene of battle and naked goddess Durga Parvati on the throne, which is decorated with a lion on the shield of bronze signet printing.

Everywhere there are figurines of horses and riders. The excavations of this ancient settlementmet dated III BC and demonstate the unique heritage of Uzbekistan. The findings captivate visitors and only here you can get acquaint with legendary historical evidence such as the Ivory - a statuette of the goddess, the ridge traced with black ink image of a woman with a hairstyle with curls and ringlets on her cheeks, and the birds, dice, styles and hair pins, beads, buttons.