The unique historical situation in Central Asia of the XX century, which caused the spiritual revolution, revealed the extraordinary personalities that represent an entire era. The greatest artist Ural Tansykbaev belonged to such figures.

Ural Tansykbaev was born in Tashkent . After seven years of school he started work at the factory. In twenty years Tansykbaev started to draw, but he learned to do it not at once. Step by step, soaking up the impressions the young artist made sketches and small drawings in his tattered sketchbook. His paintings were shown in the club of the plant. In 1924 in the newspaper "Turkestanskaya pravda" there was a note about the artist-work - Tansykbaev Ural. His first teacher in the studio at the Tashkent Museum of Art (1923-1927) was N.V. Rozanov. In 1928-1929 Ural Tansykbayev studied at Penza Art School. Having visited Moscow in 1929, the artist saw the museums; knew the modern West-European painting, which made a deep impression on him. Since that time, the young artist began intensive searches, the selection of the independent way.

Historical upheavals, switch about-face in policy, religious and philosophical basis, breaking with the traditional culture of the region reflected in his unusual fate and work.

Ural Tansykbaev Memorial Museum in Tashkent has a studio, hall, bedroom, study, balcony and terrace, through which the greenhouse of different flowers and plants is seen. 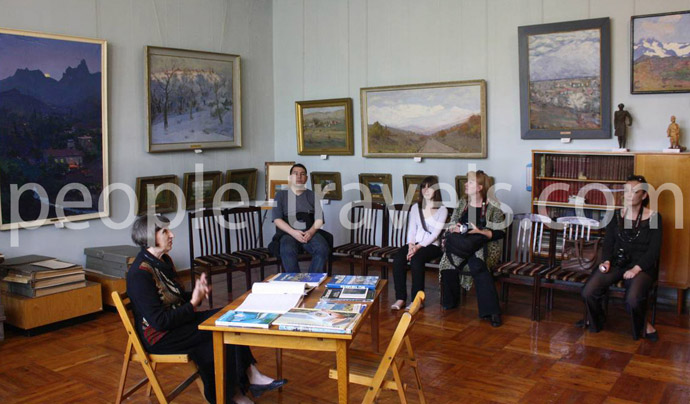 In the studio of the Memorial home-museum of Ural Tansykbaev there is the exposition artists’ works. One can see the documental material about the creative development of the painter and art objects: easels, table for paints, small plastic, photographs and reproductions of paintings.

Here in the studio of Ural Tansykbaev Memorial Museum in Tashkent there is a show-case with state awards and other documents.

You cannot pass by the hall, where Ural Tansykbaev received visitors. Among them there were prominent sculptors, art historians, artists, where endless conversations about art, literature, music and exhibitions were for a bowl of tea,. The inside decoration of the hall is kept in the form as it was during the life of the artist. On the walls there are few small sketches, photo-portrait of Ural Tansykbaev.

And around the Memorial home-museum of Ural Tansykbaev there is a mall garden, which was planted by the artist personally.

Critics point out that Ural Tansykbaev thanks to his creative research, drastically updated the Uzbek landscape painting. Having overstepped the limits of the open air sketch, he created landscape - painting. The peculiar philosophical artist's dialogue with nature is reproduced in the painting "Evening on the Syr Darya."

For today, the display of the house museum keeps 400 works of Ural Tansykbaev.

Planning your trip to Uzbekistan, don’t miss the opportunity to visit Ural Tansykbaev Memorial Museum. You may use the list of tours offered below.