The Academic Russian Drama Theater of Uzbekistan is one of the oldest theaters in Uzbekistan, which was opened on October 21, 1934. Its founders were Vasily Alexandrovich Chirkin, the first art director of the theater, and Mikhail Karlovich Vulkonsky. 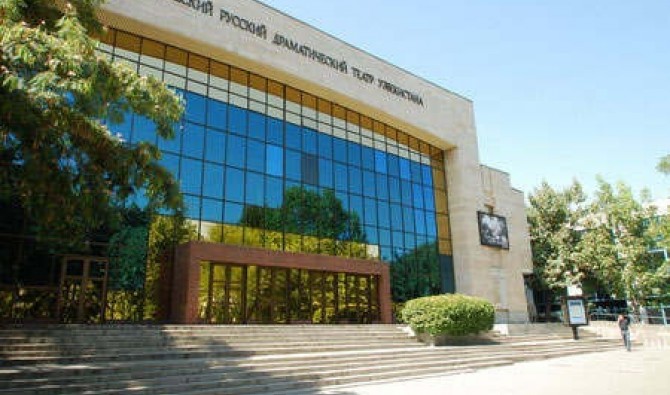 Many performances are among the significant achievements of theatrical art of the 30-50's. These are “Boris Godunov” by A. Pushkin, “Peter the First” by A. Tolstoy, “Masquerade” by M. Lermontov, “Three Sisters” by A. Chekhov, “Wit Works Woe” by A. Griboedov, "On the Strong Place" by A. Ostrovsky , etc. The theater becomes a real center of realistic art, in which the desire for life's truth is combined with a bright theatricality.

Turn in the creative activity of the Academic Russian Drama Theater of Uzbekistan occurred in the 50-70’s.; and it was determined thanks to the new direction, the gravitating search, to modern stylistics. The following staging was turning points for the theater: "The story of an empty soul", "Life of Klim Samgin", "Irkutsk history", "Hamlet", "The regiment is coming" and "The Power of Darkness".

In 1967 the State Russian Drama Theater of Uzbekistan was awarded the honorary title of Academic. In this period, V. Strizhov's vivid performances "Traveler without luggage" Zh. Anuya, "Inspector" by N. Gogol, "Man from La Mancha" by D. Wasserman, "Tsar Fedor Ioanovich" by A. Tolstoy demonstrating a high professional culture of perception of the new, were in art.

In 1990, Vladimir Shapiro was elected a theater team for the post of artistic director. Before the creative team of the theater and before himself he set the task of developing the best traditions laid down by his predecessors.

The new building for the Academic Russian Drama Theater, located in the center of Tashkent, was inaugurated on February 7, 2001.

In different years on the stage of the theater performances the plays of famous Russian, Uzbek and foreign playwrights were staged.

Most of the plays are intended for a mass audience, they are marked by the professionalism of the actors, memorable scenery, costumes and musical accompaniment.

The total number of seats in the State Academic Russian Drama Theater of Uzbekistan is 631. The ground floor has 220 seats. Amphitheater - 411 places.

On the 26th of December, 2014 the 80th anniversary of the theater with the active participation of the Embassy of the Russian Federation in Uzbekistan was solemnly marked.

The Academic Russian Drama Theater of Uzbekistan plays an important role in the preservation and dissemination of Russian culture in the region. On the theater stage there are festive events dedicated to the significant dates of Russian history and the Russian diaspora of Uzbekistan with the participation of Uzbek and Russian performers.

Enjoy the plays and theater productions along with Peopletravel. We will organize an individual tour of Uzbekistan with a visit of cultural places of the capital.