The availability of numerous museums with very different collections reflects the formation of Uzbekistan culture.

The State Art Museum of Uzbekistan helps to join the cultural, historical and artistic heritage, to human values, to see the monuments of history, to know religion and beliefs of peoples, works of art. 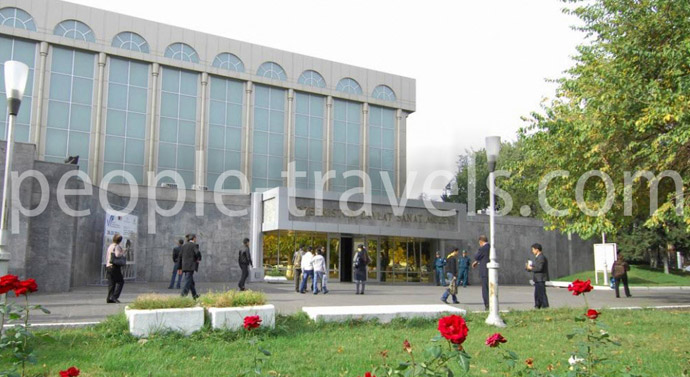 Travelling around Uzbekistan, particularly Tashkent, please enter the State Art Museum of Uzbekistan in the list of sites to visit.

As of today, the State Art Museum of Uzbekistan is called one of the major among the museums on Central Asian territory.

The State Art Museum in Uzbekistan was instituted in 1918 by virtue of the collection of the Prince Nikolay Romanov, placed in his palace. Then the collection, consisting essentially of portraits and historical pictures, greatly expanded on account of sculptures, engravings, bronze art, china ware, gifted to Tashkent from Russian museums.

Gradually the collection was filled up with canvases of Uzbek artists. And in 1935 the Museum of Art was placed in the People's House.

The exposure of the State Art Museum in Tashkent offers you the most precious pieces of Uzbek art.

Ganch engravings, ceramics, painted and engraved wood items, embroidery from all regions of Uzbekistan, carpets and decorative metal objects are displayed in the exposure of applied arts.

Today while visiting the State Art Museum the attendees of the museum can contemplate a rich collection of Russian art. It has a wide range of icons, paintings of the XVIII – XIX centuries; as well as "Russian avant-garde of the XX century – works of A. Benoit, B. Kustodiev, V. Serov, K. Korovin, A.Lentulov and K.Malevich.

Pieces of art of Western Europe are presented by such countries as Italy, Germany, Spain, France, the Netherlands and Great Britain. All articles of the Museum of Art are worthy of visitors’ attention. Among the interesting specimens there are busts of the ancient inhabitants of Rome, the statue under the name "Venus with a dolphin". Eastern states are presented by precious art exhibits of such countries as South Korea, Japan, China, India and Iran.

Decorative folk art is delineated by pieces of ancient times. These finds were discovered during archaeological excavations in South Uzbekistan - in the fortress Khalchavan, Varaksha (Bukhara) and settlements of Kuva (Ferghana Valley). 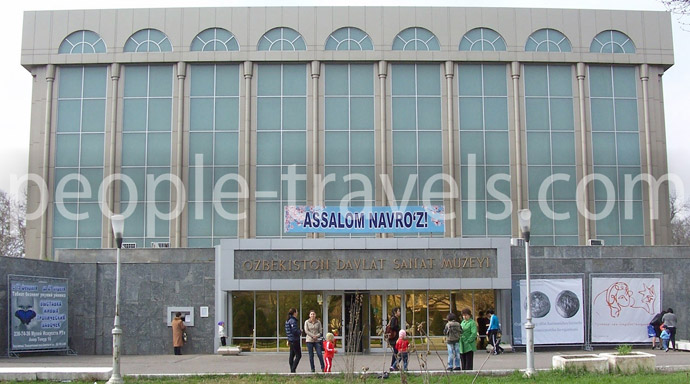 One cannot but note a gift N. Leger - artist F. Leger's widow. In 1970 she gave to the museum a number of facsimile reproductions of works by Western artists.

The collection of the State Art Museum of Uzbekistan numbers more than fifty thousand of interesting exhibits.

Three Soviet architects I.Abdulov, A.Nikiforov and S.Rozenblyum projected the unusual for those times construction, having a shape of a giant cube.

The facades of the Museum of Art are separated into square constituent parts of metal frame constructions, lined outside the stamped sheets of anodized aluminum. The walls of the basement floor and the portal entrance were riveted with gray polished marble.

Annually the museum is visited by numerous visitors, foreign tourists included. They mainly come to participate in the opening days, where rarities of the funds are exhibited. The lecture hall, sensory informational stalls, and a gift shop function in the museum.