The monument of the grievous pages of history

Located in the center of Tashkent this monument attracts numerous visitors and guests, who want to get acquaint with history of Uzbekistan. Here you will be able to see the symbol of remembrance of people who died during the World War II. Since that time more 70 years has left and in order of Presidents Degree here in 1993 in the center of the square was erected a monument to the Sorrowful Mother who is waiting for her son from the front.

Sorrowful Mother. Reverence to those who didn’t return

In the 40-s the population of Uzbekistan composed no more than seven million people. And more near two million went to the front and left their families. It was the most tragic time for the country. From this time half of million Uzbeks had not returned and about a million were injured.

The image of this monument shows reverence as well as cherished remembrance of millions of people who became victims of the World War II.

Her look embodies boundless maternal love, grief over untimely death, recalls a fate of thousands of mothers, who cherished the hope that their sons are alive and they will come back. 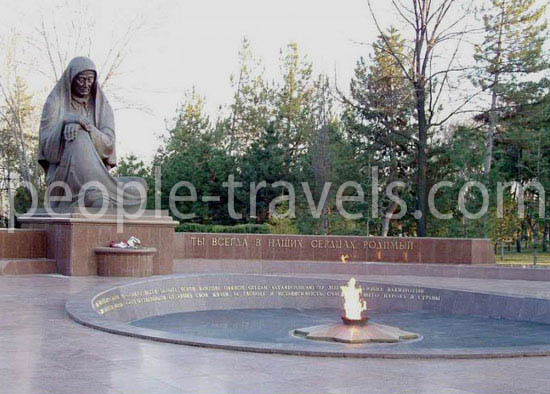 In addition, the Independence Square has another symbol of victims of this War. From the North you will find imperceptible shady park area, where is situated a main attraction - Fame Alley where on both sides are located framed galleries, lined with granite and decorated with traditional carved railings pandjara.

The gallery composes fourteen parts (symbolizing the region of Uzbekistan) with memory books in which the names of million Uzbeks are engraved in gold letters who gave their lives for the freedom of country.

Coming in from the Walk of Fame and Memory, visitors can enter the Eternal Flame and then to our monument of the Sorrowful Mother at the foot of which the townspeople always bring fresh flowers.

Park area will bring visitor to the picturesque shady bank of Ankhor.