The town with unique historical significance

When you ask someone about the place where Tashkent had originated from, not anyone will be able to answer. This place is located now outside the modern city. That is an ancient hill named Shoshtepa situated in the suburbs of modern capital.

The key aspect is religious temples that could prove the existence of a town. It is important to note other details such as a palace or fortifications demonstrating that this place can be considered as an ancient city. This fortification differentiates town from a simple settlement. And here also were developed several ancient temples with unique historical significance, one of them was a Temple of Fire counting over 2200 years of history proving an antiquity of Shosh

However, we cannot say that the real age of this town is 2200 years, because thanks to archeological excavations, any old-world town does not have a limit, while it is “expanding” with every new finding. About twenty years ago it was proved that the history of Tashkent had been counting 2000 years. And these 20 years of archaeological studies add to the age of Tashkent two hundred years.

Shoshtepa was considered as a clay town where many important buildings were concentrated: palaces, huts and adobe citadel. That was the southern outpost of Shosh defending the town on the site of which the Northern Railway Station is now located.

At the end of the III century BC in the ancient city center was built on a grand citadel. The whole architectural ensemble of 45 meters in diameter was surrounded by a double ring of the highest walls, defended the citadel from the raids of nomadic tribes. The walls were built of pahsa (clay), and today are striking in their greatness, despite his half-destroyed.

It is worth noting that the room had a cross-shaped plan of the citadel enclosed in a kind of ring of defensive walls. It's very significant because such elements are found in the most ancient civilizations. In Zoroastrian cross, surrounded by a ring meant a symbol of the sun. Only then the Christians borrowed this symbol. Here in Shoshtepa, Zoroastrian culture were developing until the Muslim invasion.

The evidence that there existed a brisk trade and bubbling with life, are the archaeological finds. According to the scientists, they were invented in Hellas, India, Greece. In addition, around the world are finding the remains of the local civilization.

According to archeologists here was built one of the unique monuments the Temple of Fire.

The temple was very high. We still can guess the outlines of the paws of lions that supported the truncated pyramid from the four sides.

There is still much to do on the excavations site and someday work will be resumed there. Maybe another town will be found under the Temple of Fire with its own palace and citadel and the age of Tashkent will grow for some hundreds years more.

It is so thrilling to touch the wall built over 2000 years ago. You will get more interesting information if you visit Uzbekistan by yourself. 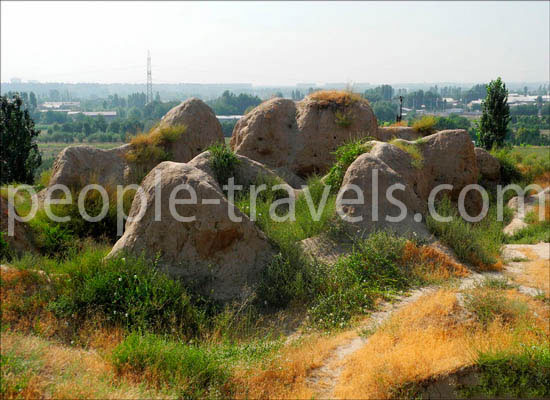