Shohruhiya. The edge of the earth

The edge of the earth

The history of this place goes far back in the middle Ages.

If you want to know more about Uzbekistan history the Peopletravel company offers you to choose one of the big variety tours to Uzbekistan. The port city was rebuilt during the reign of Tamerlane, and was named in honor of his son and the name of the fortress Shohruhiya. It was a stronghold port on the Syr Darya River, which housed more than 50 hectares of residential buildings, towering abovethe water.

Surprisingly, Shahrukh himself never crossed the threshold of gate of the city, named in his honor. He ran his empire from Afghanistan.

During the reign of Ulugbek Shohruhiya was of a great strategic importance that kept in subjection Tashkent rulers. It had only a military significance, not commercial one, and soon people left these places. So gradually the walled city was buried under the sand...

Today to see the old fortress, we must stretch the imagination. From a distance it resembles a natural cliff above the river. But under the feet you can feel the emptiness that tells us that the earth is hidden under a layer of a real city. Archaeologists are working in these areas very carefully and it is not very intense. All excavated things are hidden underground, for the time being. It is necessary, first of all, to resolve the issue with the preservation of the city, and only then to dig in order to leave no excavations in the open space.

But every year, the museum exposition of Temurids updated with new exhibits that were washed the shores of the fortress. It is said that in the spring trunks with good, washed down from the walls of the city, swim along the river...

This place is definitely attractive. Nearby residents like to walk along the boundary, looking for the "edge of the earth." Here come the lovers of antiques and tourists that are keen on monuments of Tamerlanes era.

Near the shore stands the mausoleum Shomirkori that was opened in honor of Seyyed Nimmatullah. This is surprising, because the historical evidence does not coincide with the popular rumor. Yes, Shomirkori traveled across Mavarounahr, but not for a long. And the remnant of ancient tombstones, which today is enclosed by a fence and is lined with new bricks, was hardly his grave because it is known that he was buried in Iran. It is a mystery story that is not yet solved.

Shohruhiya is beautiful in anytime, especially in spring and autumn, when there is no heat and cold. In the spring the whole valley is dotted with tulips, on the ramparts above the river and walking fresh breeze... 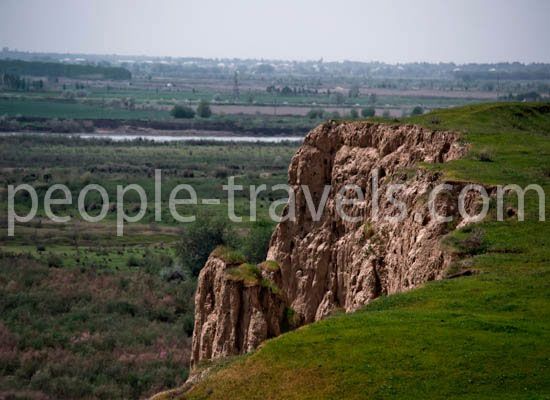