In hot and dry climate of Central Asia water has a special place and meaning. Water storage served as improvement in towns and villages, where constructed open water reservoirs, and along the caravan roads built special indoor pools - sardoba.

Sardoba presented as circular reservoir for collecting and storing water, which usually arranged along the caravan routes, and rarely - in the cities; were they filled with melt, rain and occasionally river water. In Tashkent oasis, where it was built a few sardoba along the caravan routes from Tashkent to Fergana valley, these structures called Gumbaz (i.e. dome), and they were sometimes erected over the spring.

One of them is partially preserved in the villages Kainar, located 10 km north of Akhangaran near Chatkal ridge. This small ancient foothill village arose at a spring on the ancient caravan route during the descent into the Angren valley.

In the XIX century in the period of economic upturn, when maintained and improved the old ways of communication over the aforementioned sources was built Sardoba Kaynargumbaz. 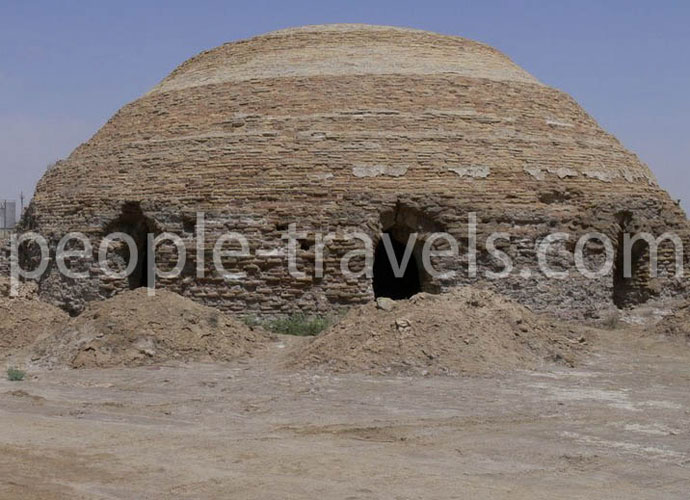 According to scientists, Kaynargumbaz was about 10 meters in height and approximately the same in diameter at the base, which is built of large stones and forms a shallow area of reservoir. The water is conveniently situated close to the walls Gumbaz.

The stone base of Kaynargumbaz was arranged above and now fell upon the dome on ganchhake (a mixture of clay and gancia). Dome consisted of three tiers retreating inside the ring of masonry, of which the top tier reached a level of about six meters.

In the north-eastern part of sardoba was arranged arched entrance with a small area under the dome, in the southern and south-eastern part of five windows, and above them - series of holes for ventilation. Spring water flows out of a small brook under the lower west window.

Only lower part of the dome preserved until now. Near the sardoba was situated caravanserai that presumably refers to the middle of XIX century, the ruins of which are on the verge of extinction. It was a rectangular structure, with a closed inner courtyard.

Also near sardoba and caravanserai preserved traces of ancient mine, where presumably mined copper, silver and lead, and where archaeologists had found 12 pit mines belonging to XI-XII centuries BC.