Cathedral of the Sacred Heart of Jesus

It is a story of another beautiful monument of Tashkent city. The idea of the construction of the Polish church dates back to 1875, as the new city had at that time a rather large number of Catholics. But, as always, the case moved from place only in 1902, when a representative of the Roman Catholic Church of Tashkent was appointed Master of Theology Justin Pranaitis.

Bought from a certain widow Mariam Bibi Narbaeva small plot of land in 1905 a priest built a small building so-called old church, which is often called the "House of the Polish society." It housed not only the chapel, but also an orphanage, school, apartment prior.

Externally, it was an ordinary two-storey house, which was different from the others only in the Catholic cross dormer loft.

Church had a three-nave hall and a height of 25 meters with dimensions of 42 by 32 meters. The front facade was to be decorated with stained glass as a Catholic, rose, lancet windows and twenty-three sculptures depicting Catholic saints.

Enjoy atmosphere of this place with Uzbekistan tours and Peopletravel.

Construction was started before the beginning of the First World War - in 1914 and progressed slowly. To expedite the work at the request of Kurata group of Catholics was delivered from the front to Turkestan.

There were used construction methods that strengthen the seismic resistance of the building - the so-called flying buttresses that also served as decoration.

Construction of the church was almost over, when in February 1917 Justin Pranaitis died. Persons, who replaced the late Kurator, could not continue his work in the same spirit. 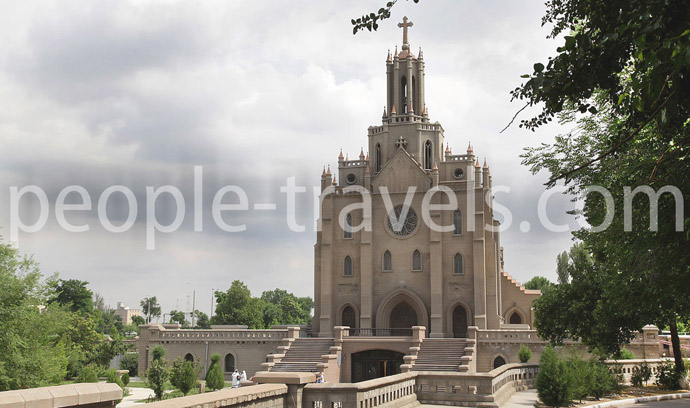 Many decorative ornaments was hit, statues was disappeared, numerous temporary owners trying to rebuild the building. At one time it housed even medical school. Only in 1981 began restoration, parlayed a middle-aged (Human standards) in a great church organ hall. Near the main entrance to the building there is a monument to the Polish Soldiers Army Gen. Now held in the premises of the church beautiful organ and choral concerts, Christmas meetings and Catholic services.

Simple, with an inconspicuous, but majestic building is decorated with street Musakhanova (now Taraqqiyot Street) and Salar ancient embankment, being another unique attraction of our city.