Museum of Geology in Tashkent

Planning your travel to Uzbekistan, you should include Museum of Geology to the list of most interesting and outstanding attractions of Tashkent.

The Geological Museum of Uzbekistan in Tashkent is the only geological museum in the country. The museum was formed in 1926. The museum's funds number more than 6 thousand unique exhibits; an extensive collection of minerals and rock samples is collected here, not only from all over Uzbekistan, but even from the ocean bed. 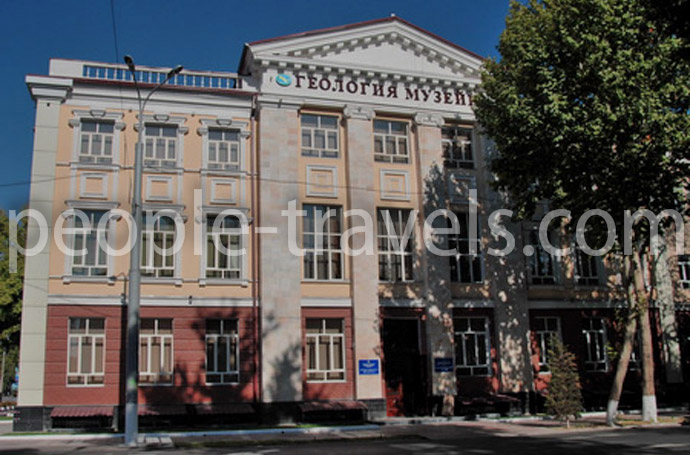 More than 50 000 of exhibits and archaeological finds are allocated in 12 rooms of the museum.

At the entrance to the Geology Museum in Tashkent visitors can eye the first exhibits - a block of gold-bearing vein, petrified trees, in the vestibule there is a petrified shellfish, decorative vases, found in archaeological excavations. Here are samples of minerals: quartz and gold, copper and arsenic, aluminum and antimony, lead and mercury, ingots of precious metals, nuggets of precious and semiprecious stones. Unique ideal crystals of the rocks in the museum are samples of a scientific base for many institutes and schools. The children, firstly, are attracted by the skeleton of a duck-billed dinosaur from the genus Proheneeosaurus. The skeleton was found in 1961, 45 kilometers north of Tashkent, near Keles. This dinosaur was herbivorous and lived during the Jurassic period of our planet's existence. This exhibit rightfully occupies a central place in the hall.

Explicit evidence of the domination of dinosaurs on Earth in those distant times is also the petrified traces of their claws, found in many places on the territory of Uzbekistan and presented in this room.

Also valuable exhibits in the Geological museum of Uzbekistan are the remains of the mammal of Archeodiskodon from the order of proboscis (mammoth), which were found in 2013 in the foothills of the Kuramin range, in the vicinity of Akhangaran.

The remains are the bones of the skull, several teeth and a fragment of the tusk of an animal that lived about 2-2.5 million years ago on the territory of Uzbekistan. One of the tusks reaches a length of 1.75 meters, the second - 2.78 m. The diameter of the tusks is 25-30 centimeters.

Tusks and teeth of the southern mammoth were exposed thanks to a powerful mudflow. Remains preserved due to lenticular clayey deposits, covering clastic material by the islets. Scientists suggest that the remains are well preserved because of the belated glacial period. According to experts of the Geology Museum in Tashkent, in the mainstream of the once-abundant river Ovzhazsay there can be a whole cemetery of prehistoric animals, mostly mammoths.

In the show-windows of this hall you, having given the will to the imagination, can mentally move to the time when the ancient Paratethis Sea stretched across the whole Central Asia to east of the modern Black Sea to Kazakhstan. Evidence of this is the collection of teeth of sharks and rays that lived in this sea more than 60 million years ago. 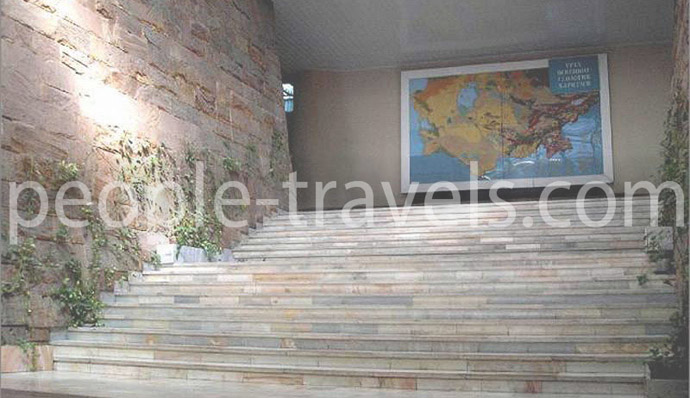 Museum of Geology of Uzbekistan also shows modern bryozoans, mollusks and corals from the Indian Ocean, red coral beads brought from Africa, whalebone and much more.

The Museum of Geology in Tashkent tells about the processes of formation of the Earth and the Earth as a part of space. The collection of various types of precious stones and unique samples of rocks briefly explains the geological development of Central Asia.

The Geology Museum in Tashkent is conveniently located in the downtown area, not far from Central Department Store. Tourists, travelling around Uzbekistan, can visit the museum within Peopletravel Company.