Museum of Astronomy in Tashkent

The exhibits of the Museum of astronomy are original, colorful and individual.

The museum is divided into several thematic sections, each of which has its own direction. For example, in the department of the birth of astronomy in the region you can find out how it happened, and how significant it was for the development of astronomy throughout the world science.

The museum presents portraits of the greatest astronomers of all times, photographs of planets and stars, as well as the main scientific bases: a unique observatory on the Maidanak and the Kitab latitudinal station.

The modern Uzbek astronomy is worthily represented in the Astronomical Museum in Tashkent. It studies the Earth, planets and small bodies of the Solar system, unsteady stars, star formations, and dynamics of star clusters in our Galaxy and beyond.

A special interest among the visitors of the museum is the model of the meridian quadrant of Ulugbek. The museum also presents a layout of his famous tables "Zij-i-Kuragoni", in which, with a striking accuracy, the coordinates of 1018 stars were determined.

In Tashkent Museum of astronomy there is a hall dedicated to foreign astronomers of the 18-20th centuries. Among the exhibits you can see the telescope of the English master James Short that was designed by Isaac Newton. 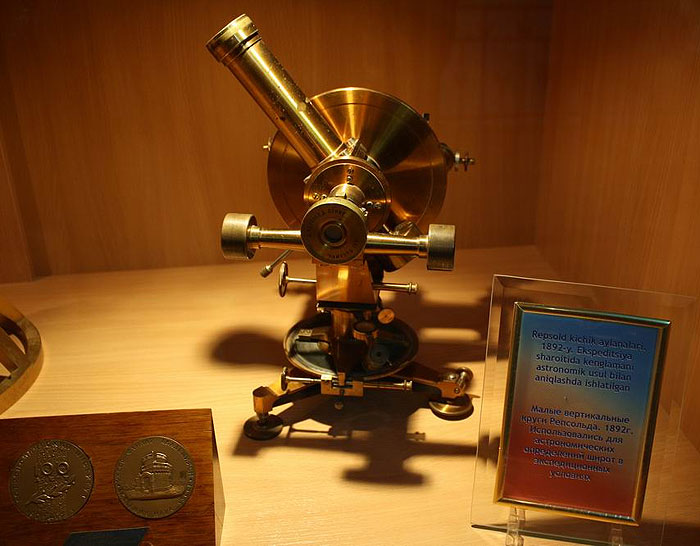 Great attention is paid to the reflector of the English optician Dollond and the octant, which was also developed by Isaac Newton. The sea chronometer made by Harrison, the watchmaker from London in the 18th century, was even awarded a prize.

In addition to all of the above, the Institute's employees try to improve the quality of teaching astronomy.

Visiting Tashkent Museum of Astronomy, you will make a so-called trip to the magical astronomical world. And Peopletravel Company will immerse you in an oriental tale if you choose Uzbek tours.