In downtown Tashkent, in the residential neighbourhood the tourists and guests of the capital can visit Tamara Khanum Museum. The street, where the museum is located is named after Tamara Khanum.

Tamara Khanum (real name Tamara Petrosyan) was a great dancer, singer and ballet master. In 1956 she was honored with a title of People's Artist of the USSR. Tamara Khanum was called “Eastern Isadora Duncan”.

After one funny story the stage name “Khanum” firmly entrenched the dancer. It so happened that before a major concert in Moscow, one of the organizers heard that countrymen called Tamara "Khanum" (woman). The next day the posters with the name "Tamara Khanum" were hung over the city.

Tamara Khanum was born in 1906, 29th of March, in a small village (at present Margilan city). When Tamara was 19 she felt a wide recognition and fame.

In 1925 she graduated from the drama school in Moscow, and, simultaneously, began a broad concert activity. She performed in Paris and other cities of Europe, contributed to the emergence of music and drama theaters in the cities of Uzbekistan, carried on correspondence with international artists. 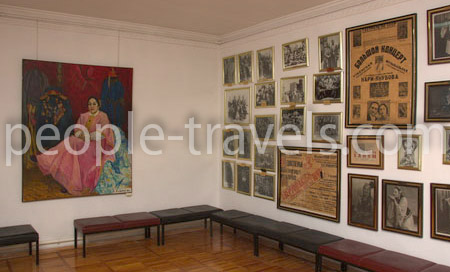 In 1936 Tamara Khanum became a soloist of the Uzbek Philharmonic. She was engaged in the reforms of the Uzbek folk dance. However, she became worldwide known thanks to her collection of song and dance folklore of various peoples of the world.

During the 20-30-ies of the XX century, Tamara Khanum made a lot of new things in the dance and performing arts of Uzbekistan. The creative way of the actress was traced with the enormous efforts from amateur ensembles to universally recognized awards and state prizes. Tamara Khanum independently created an original genre of folk song-dance - "Lyazgi” that won a great popularity.

On Tamara Khanum’s initiative the school of classical ballet was established in Tashkent.

Foreigners could not understand, of what nationality this amazing dancer was. Armenian by blood, who grew up in the Uzbek mahalla (district), Khanum from each trip brought a new dance, reincarnating in it with a great force. In her creative piggy bank there are dances of 86 nations of the world.

The career of Tamara Khanum lasted more than 60 years. Having devoted her life to art, she became a real symbol of the Uzbek popular dance.

Optimism, sense of humor and fortitude helped her to maintain her beauty. Until declining years, she toured the world, without losing a boiling energy or flexibility of movements. Cheerful, kind-hearted by nature, she like a magnet attracted people.

It is known that the British queen personally presented Tamara Khanum with the high award for her contribution to art.

Tamara Khanum passed away in 1991 in Tashkent. She bequeathed to make in her house a Memorial Museum of Tamara Khanum.

Tamara Khanum Museum in Tashkent started acting in 1994. The basis for the creation of this interesting museum served a permanent exhibition of the collection of stage costumes of Tamara Khanum. 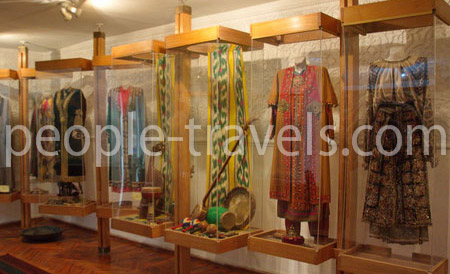 Here you can see Slavic clothes, Asian costumes, and even the Egyptian dress. Each of the costumes, embroidered with gold and silver threads, and precious stones is itself a sample of art.

In addition, in the Memorial House Museum of Tamara Khanum the visitors can contemplate the interiors of living rooms, the collection of photographs and posters, sound recordings and scripts, portraits of Tamara Khanum by Uzbek artists, and much more.

Tamara Khanum Museum in Uzbekistan is a significant place, thanks to that we can know about who Tamara Khanum was and what a contribution she made in the development of art in the country.

To know more about this great artist you may contact Peopletravel Company and book a cognitive and memorizable tour to Uzbekistan.