The symbol of heroism of capital residents

The streets and squares of Tashkent adorns many monuments, among them Monument of Courage deserves special attention. It was placed here in memory of a terrible accident in the history of the city.

The monument was erected 10 years after event that became the most tragic in the modern history of Tashkent. On a cube of black labradorite carved date - April 26, 1966, on the other side of the clock face, this indicates the time - 5:24.

It was at this time, residents of Tashkent experienced the strongest earthquake in 8 on the Richter scale. 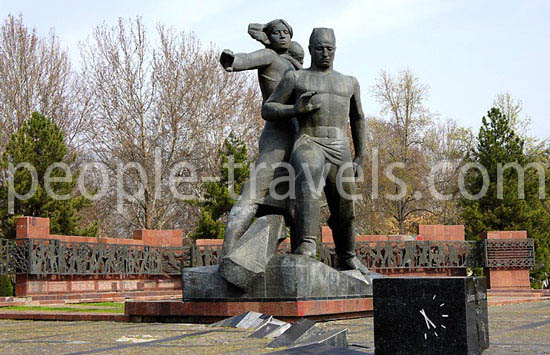 The epicenter was at a depth of about 10 km approximately where in 10 years and was a monument. Over 2 million square meters of floor space, 236 office buildings, 181 school, 36 cultural and social institutions were destroyed, 78,000 families leave homeless. But despite this, the city survived.

Many people came to the aid of Tashkent residents not only from other regions of the country, but from all CIS countries. There was construction groups from Moscow, St. Peterburg, Volgograd and other cities.

Find out more about Uzbekistan tours offered by your guide to ancient places of Central Asia Peopletravel.

New life of the city

Just a few months after the earthquake, new homes took first settlers. Neighborhoods were built in the devastated city center on the outskirts of the capital rose entire residential areas.

And after 3,5 years the city had been completely restored. True friendship of peoples showed builders from all united republics. Until recently Tashkent had a street named after cities, of which arrived team of builders. Streets Novomoskovskaya, Volgograd still reminded of a helping hand, outstretched in the difficult time. Unfortunately, all the objects of the past were renamed, but the townspeople pay tribute and honor the memory of bygone days. 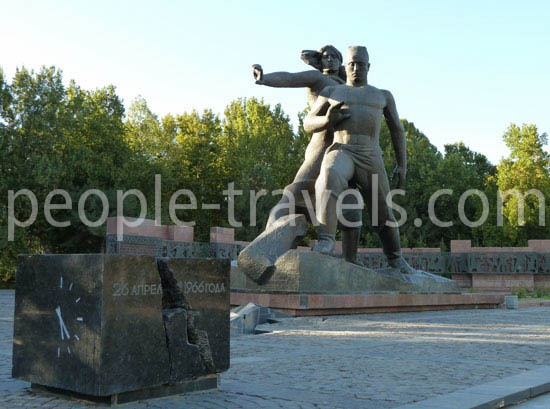 We return to the history of the monument. In the center of memorial complex is a composition of a cube that splits crack, symbolizing break the crust, and the zigzag crack extends to the foot of a bronze sculpture.

Bronze figure depicts a woman hugged the baby to the breast. A figure of a man shuts them all over with the impending disaster. Stele decorated with bas-reliefs behind these figures. This monument became a symbol of people who return the beauty of the city. Today, a monument of Courage became one of city attractions, where people like to spend the evening.