Masterpiece from the Medieval Tale

Kukeldash is the most characteristic structure of the ensemble Chorsu in Tashkent. Located at the south-western corner of the Tashkent it was built in 1569 by sultans Barak Khan and Dervish Khan, bore with the nickname "Kukeldash" (foster brother).

Madrasah was the Muslim educational institution, which serves as a high school and a Muslim "seminary".

Kukeldash is located on Chorsu square, where for a long time was a crossroad of caravan routes, and developed business area of Tashkent, surrounded by blocks of artisans.

In this historic place once heralds read Khan's orders, and local residents exchanged news. Located on Chorsu square where the ancient caravan routes converged largest batches this place has become the main shopping area in the city. 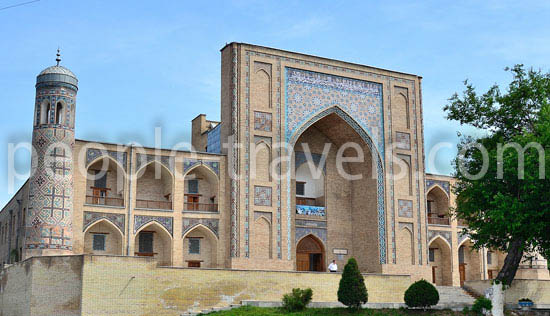 This historical monument is the largest of the 23 madrassas of old Tashkent and has a traditional architectural design. This can be found a rectangular courtyard that encircled with khujdras and monumental facade flanked with turrets.

Because of the numerous repairs the original appearance of this large building is unknown. Folk legends called Kukeldash as a three-story building, but the former times preserved only small fragments of the masterpiece.

Occupying a central position in the town, Kukeldash played an important role in the urban life of old Tashkent. Courtyard madrasa was a traditional venue for the election of deputies of the Muslim in the City Duma.

Kukeldash became the first medieval architectural monument in Tashkent, the rehabilitation and restoration of which has been allocated a government grant in 1923. 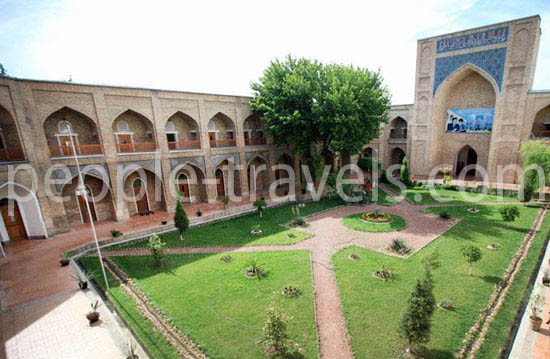 This bewitching construction was built out of bricks, in some places, decorated with ornaments of glazed ceramics and majolica. The main entrance is made with a beautiful stellate pattern, and at the top of the entrance arch stresses amazing niche.

Facade of the building on both sides decorated tiered loggias. Angles of Kukeldash madrassa complete with beautiful high tower minarets.

Nowadays, every visitor could enjoy the national color buying souvenirs in ethnic shops that sell goods of craftsmen, near this beautiful sightseeing.

Even after many centuries Kukeldash makes an indelible impression on every traveler and leaves fond memories in the soul. This monument of our heritage is preserving the invaluable sources for the study of the past.