In Tashkent is located Juma Mosque of Hodja Akhrar. It is mosque with courtyard type that was built here in the 17-18 centuries.

The main building has a cubic shape and covered by the dome. In a low drum cut out four small windows. On the east wall, which faces the courtyard, is a large arch. Arch niches located at the inlet opening and they have the form of a lancet.

In the 9th century the Arabs conquered the ancient Zoroastrian Tashkent. City then called Chach. Madrasah was built in 1451 opposite the main entrance on the north side. It was a modest, one-story and to this day has not been preserved. In 1954 it was dismantled for restoration bricks to neighboring buildings. 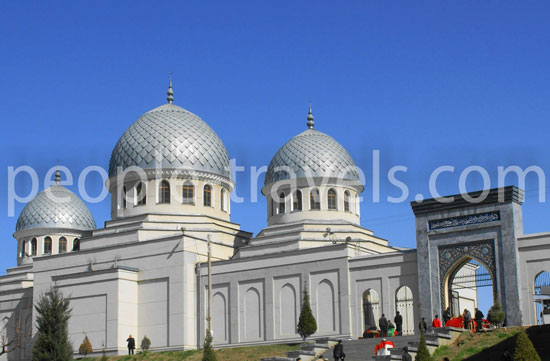 Tashkent is often affected by earthquakes and numerous ancient buildings sometimes strike from disaster. Friday mosque was restored too often. In the 18th century, during the astounding growth of the Tashkent state, the main cube was thoroughly rebuilt, as well as vaulted galleries with cells around a courtyard.

In 1868 the mosque severely damaged because of earthquake, as well as other monuments. The main mosque of the capital was closed for nearly 20 years. It was finally rebuilt only in 1888 and it became known as the royal mosque, because the money to restore it gave Alexander the third - Emperor of Russia.

The architecture of the monument had changed, but it is still, produced an impressive feelings. In Uzbekistan, the only two buildings of those times surpass it in size. Those are Bibi Khanum Madrasah in Samarkand and Minaret Kalyan of Bukhara. 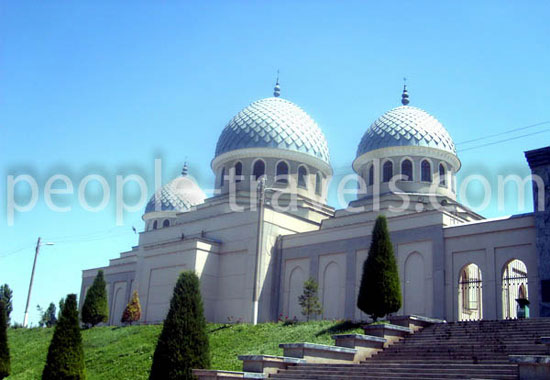 Restore this monument of Tashkent is only possible from old photographs. When there were no high buildings, building Juma mosque of Hodja Akhrar was conspicuous from all sides of Tashkent. Especially nice view opens from Chorsu market that noise in this place for many years.

With a height of 15 meters, the monument towers over the surrounding buildings and gives an opportunity to capture Tashkent bird's-eye view. The mosque was rebuilt in 2003 by modern methods. Now in the Old Town hill you can see the whole three domes. The mosque, which is located - close to Chor-Su bazaar attracts a large number of local people and visitors.