The part of history, a huge cultural layer and a national inheritance

Each town has a patron saint. In Tashkent it is Abu Bakr Muhammad ibn Ali ibn Ismail al- Shashi Kaffal - Hast Imam. Hast or Hazrat is translated as a saint and the word "Kaffal" means the profession - locksmiths.

The complex Hasti Imom is a set of historical buildings which began at the base around the kubba of the first imom and majestic Muslim mentor, Abubahkr Muhamad Kaffal. Belonging to the late Middle Ages this complex makes outstanding impression by inimitable majolica and beauty of ancient domes.

Hasti Imom has been one of the most significant downtown of cultural and architectural development of Islam world in Uzbekistan during several ages.

History of the monument

A long time ago, at the end of the last millennium, the birthplace of Hast Imam was urban Rabad that located outside the city wall. 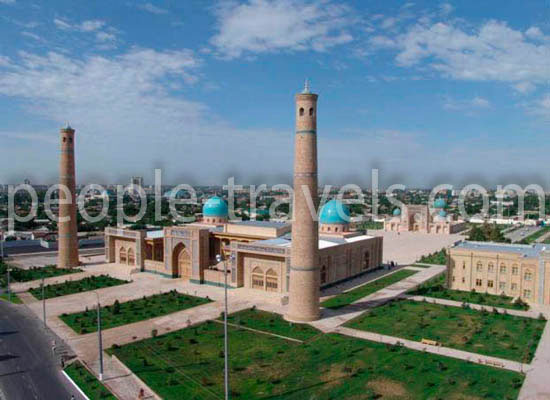 There was Mahalla of artisans through which water carried one of the oldest urban channels Kalkaus named after the hero of the medieval epic Shahnameh king Kay Cavus.

In the middle of the block water of the channel carried to house walls forming scenic views that travelers have already called second Venice.

On the shore of the channel was a house of artisan Kaffal, masters for the production of door locks. In this family, the future saint was born in 903. Parents, of course, planned that the boy will continue the dynasty, but Abu Bakr chose philosophy.

Hast Imam and his contribution

Almost all his life Hast Imam lived in Baghdad and reached there an unusually high position. He was not a priest in our understanding. Rather, he was a philosopher, poet and writer. Baghdad caliphs appreciated his diplomatic talent and ability to see the political situation in the three-dimensional space.

He became well-known due to the ability to write flawless diplomatic notes, which always brought a positive result. He was an ambassador of the Arab Caliphate to the Byzantine emperors, and for the wisdom and foresight in Bukhara he was nicknamed Al- Kabir - Great. 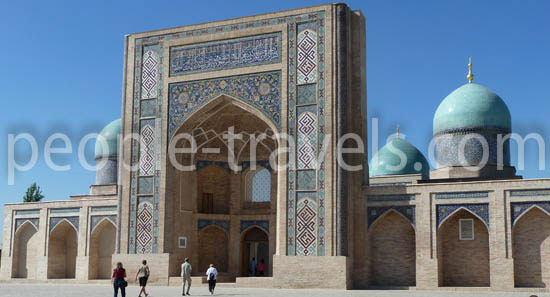 Then, according to the custom of the time, Hast Imam returned to Tashkent, to die at home. He sat near the place where now stands his mausoleum, under a huge plane tree - gray wise old man, which followed the advice and kind words.

When Hast Imam returned to Tashkent, the city was attacked by Turks Karakhanids. And the old man did the unthinkable - drew Turks to the Islamic faith. Initially Ilkhans then ordinary people.

In Uzbekistan so many mausoleums erected in memory of the saints, and it is not quite matched with the covenant of the Prophet, that no mausoleums be over graves should not. Nevertheless, we are grateful for these buildings our ancestors because it's part of history, a huge cultural layer, allowing us to see the past. When you come to Uzbekistan by all means visit Hast Imam monument.

The treasury of Islamic world

This mausoleum was built on the grave and Hast Imam. Then formed around it mazaristan and it was the largest cemetery of medieval Tashkent. So when we go to the square, we must not forget that beneath our feet lie whole generation of Tashkent buried in this place for a thousand years.

There is an unusual architectural approach has been applied. Belonging to Medieval the construction of mausoleum differs from ordinary Muslim architectural style. Entrance portal is directed not towards Mecca, it has north direction.

Unique decoration with oriental majolica and charming atmosphere create a place where many believers are gathered.