Center of National Arts in Tashkent

Center of National Arts in Tashkent

The Government of Uzbekistan implemented the project to congregate examples of national culture, art and traditions under one dome. The Centre of National Arts in Tashkent became the abode of Uzbek customs, art, handicraft and everyday life.

In former times on the place of the Centre of National Arts there was the typography №1, which started its work in 1868 under the district staff of Turkestan Governor General. According to the legend, Khamza (Uzbek poet, playwright, and public figure) himself worked here. And even the printing machine of Khamza was kept. 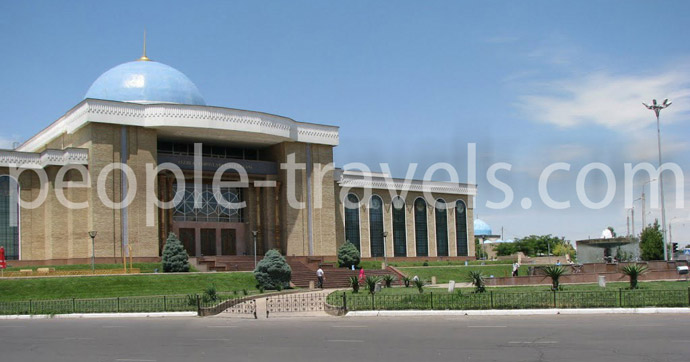 Initially on the site of the Centre of National Arts there was the gallery of national dress, so today every visitor can look through traditional Uzbek costumes and visit the shows, displaying the collections of young modelers from Uzbek fashion house.

Many clothes of the collection are the up-to-date look at the traditional Uzbek native costume.

The Centre of National Arts is focused both on conventional and contemporary art of Uzbekistan including painting, sculpture, drawings, design, cinematography, theater, national dance, weaving. So, here you can find creations of renowned folk artists, and younger generation today representing the nation at worldwide exposures and festivals.

In the Centre of National Arts there are art galleries, where you can watch the action of gifted artists. Each of art galleries is devoted to different types of folk crafts: metal carving, ceramics, gold embroidery, painting and others.

The structure of the Centre of National Arts is implemented in oriental style. Best architects of Uzbekistan, recreating the technical skills of medieval architects worked on this project. Inside the building looks modern, though there are elements of the eastern decor in the interior finish. The Centre of National Arts has three floors. Around the center there is a beautiful garden where Uzbek trestle beds (summerhouses) are located. Under the vaulted blue cupola of the centre there is the main stage-podium, which regularly hosts show presentation featuring the best artists of Uzbekistan, fashion shows of designers of the Tashkent House of Style.

Guests and inhabitants of Tashkent can visit the Centre of National Arts with variety of boutiques, where they can purchase modern clothes and thinks made by folk masters. On the first and second storeys there are restaurants and cafeterias, where one can find dishes of any cuisine of the world, including traditional Uzbek.

The Center of National Arts in Uzbekistan became a worthy attraction, allowing to touch with the different directions of specific culture of the Uzbek people, represented by all regions of the land. The peculiarity of the centre is in the fact that it meets the preferences of today's visitors wishing to spend the unforgettable time in the best traditions of the East. That is why travelling around Uzbekistan don’t miss the opportunity to visit the center.

The Centre of National Arts is conveniently located in the area of old part of Tashkent nearby Chorsu bazaar that suits while having a tour to Uzbekistan.