The sacred item of history

Near Hast Imom square, one of the fascinating monuments of medieval age, Barak khan madrasah is situated. It catches one's eye with its unique construction, which differ from the ordinary buildings of this category.

The madrasah and two built-in mausoleums constructed during the 15th and half of 16th centuries. First of those was Nameless mausoleum in the eastern part of the modern complex. The latter one is Mausoleum-Khanaka with two domes that built in 1530 in commemoration of Tashkent ruler, Sheybani. 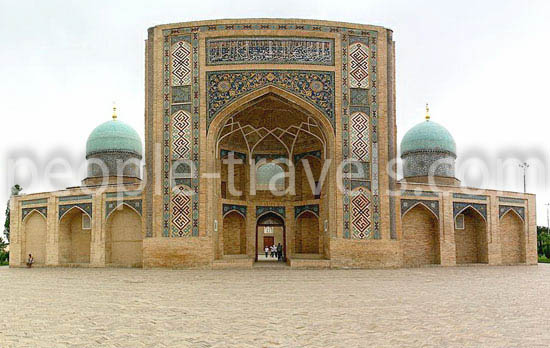 It is gorgeous decorated with traditional ornaments and gilding, but with time this building has gone through several redesign processes. Its main hall as well as the nameless mausoleum and darskhana are vaulted with turquoise domes.

Within few decades, the spiritual seminary of Uzbek Muslims had been located in the Barak khan madrasah and nowadays it occupies this territory of a new construction and the premises of the madrasah were given up for housing craft-rooms.

All the sights of Tashkent amaze by extraordinary harmony of the architectural masterpieces of medieval charm.