Amir Timur Square in Tashkent is the center of the city. Eight main streets of Tashkent originate from here.

The basis of the flatness of the square was the idea of intersection at the center of two large avenues - Kaufman and Moscow. These two avenues divided the locality into four parts and passed through it. Withal the Square of Amir Timur was surrounded with the road, to which the rest roads were joined.

It should be noted, that these two streets following ancient trade ways, appeared in the outskirts of the city many centuries ago. Moscow avenue was the length of the caravan road to Kashgar and to China of the Great Silk Road. And Kaufman avenue was the section of the road, leading from the city citadel through Kuylyuk and through the Chirchik river to Kokand being the part of the old caravan way. Thus, it can be supposed that the environs of this crossroad from ancient times had been the specific cult place.

Amir Timur Square was laid out in 1882 by order of M.G.Chernyaev, the governor-general. Initially, it was a small public garden named Konstantinovsky. However, so far from the original plan of the park is almost nothing left.

The monuments, corresponding to different epochs of state development, adorned the central part of Amir Timur Square in various periods. The first monument was the statue of the governor of the Turkestan area – K.P.Kaufman. Later there were different obelisks of revolutionary themes. In the 40-s they were replaced by the monument to Joseph Vissarionovich Stalin, and in 1968 monument to Karl Marx replaced monument to Stalin. On the 31st of August, 1994, on the eve of the third anniversary of Uzbekistan's independence, renamed the Square of Amir Timur a new monument to Amir Timur was set.

Ilkhom Djabbarov is the sculptor of the monument. The maxi-sculpture is made of bronze. The Great Amir is represented in royal armour, decorated with orders. Amir Timur is sitting on a riding warhorse.

Amir Timur was born in 1336, 9th of April in Khodja Ilgar village, near Shakhrisabz. Organizational skills of the future conqueror and commander began to appear when Amir Timur was 17-18 years old, during his participations of internecine dynastic wars. 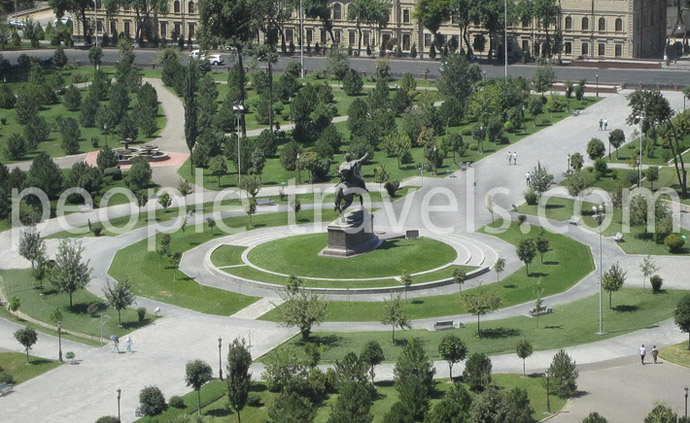 History puts Amir Timur in one rank with such major generals as Alexander the Great, Darius I, Julius Caesar. Amir Timur went down in history as a famous military leader, who did not lose any of the thousands of battles. And as a politician, he made a great contribution to the development of statehood, the progress of science, education and culture.

The slogan “Justice is not in force, and force is in justice”, which was used everywhere on the whole territory of Amir Timur’s state, turned into moral and spiritual criterion. So, on the pedestal in four languages Amir Timur’s famous motto “force is in justice” is engraved. Today many books, devoted to Timur’s epoch are published.  The number of major works devoted to Amir Temur, created over the past 600 years, in European languages, is equal to 500, and in Oriental languages the number is 900.

Administrative and architectural buildings are situated around Amir Timur Square. They are “Uzbekistan” hotel, buildings of juristic institution (former building of the women gymnasium), Museum of History of Timurids, famous Tashkent chimes and a new building – Palace of Forums.

Amir Timur Square is a favorite place for resting among townspeople and guests of the capital.

It is very easy to book a tour to Uzbekistan with Peopletravel Company and visit Amir Timur Square.

Amir Timur Square in Uzbekistan is not only interesting place with its old history, but a unique and appropriate place for making nice photos of Amir Timur Square – photos that will remind of wonderful travelling around Uzbekistan.