Aktash. The place with incredible atmosphere

The place with incredible atmosphere

This town is one of the most beautiful places in the foothills of the Tien Shan. Aktash is located 60 km from Tashkent near mountain range Karzhantau. And it stands out among mountain resorts as a special, because of incredibly mild climate. At these relatively low altitudes, 1100-1200 m above sea level, summer is never too hot; the highest temperature is 24 C in July. And when on the slopes of Aksu has long been lying deep snow, thick forest tracts do not lose their bright colors.

Lush vegetation seemed to have absorbed the low dome-shaped tops and even today, looks like a wild primeval forest.

One hundred years ago these places were the almost bare hillsides collapsed with mudslide soils. For the current well-being, we should thank the local people who planted trees near mountain slopes.

It's hard to believe that the current violence of nature - the work of human hands, but the terraces were planted with organically blended apple, walnut, plum, oak, maple and ash trees. 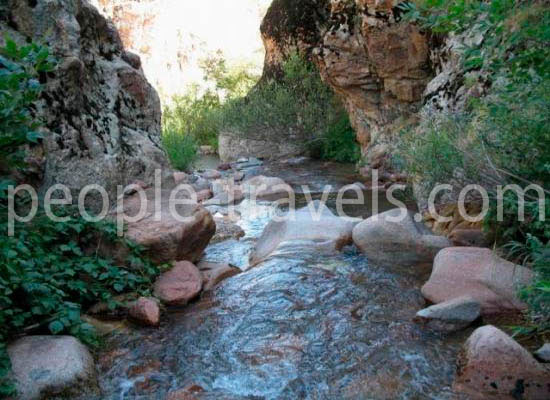 Here is a gigantic plane tree that exists more than a thousand years on the bank of a mountainstream. Relic had a giant 21 meters in circumference. Unfortunately parent tree didn’t survive and today there is seven spikes, the trunks of which already have three meters in diameter. "Ettiogayny" - "Seven friends" the name of this natural phenomenon, and indeed, like a hug cronies, gigantic trunks in height are closed tightly, forming a canopy of its green dome of the tower. This tree is famous for the fact that after all the drops and the leaves stay green almost until December.

At the foot of the giant, scientists discovered burial mounds in the form of the nomadic cultures II-IV AD. And in the center of the village lie the ruins of the ancient city, now resting on the bottom of a small hill.

The name of the tract - Aktash, rooted to the middle of the XIX century, when this area was mined in the ornamental stone agalmatolit completely white. "Ok Tosh" can be translated as "white rock". But today, Aktash combined with an abundance of forests; this place is one of the most environmentally friendly in the world. That is why local people are the most long-lived in Uzbekistan.

It was here, in a valley located recreation complex "Aktashsay."This recreation area is famous for the favorable microclimate, healing alpine air, herbs and shrubs.

Everything here is conducive for climatotherapy - treatment and prevention of many diseases of the respiratory system, central nervous system, etc. There are several recreational areas for people who need to carry out a period of rehabilitation after surgeries, illnesses and injuries.

Everyone who wants to relax with salubrious air, wander through the green thickets, listen to the silence of the gurgling mountain streams, scenic beauty, and just meditate away from the noise of the city.