In central part of Tashkent in Beshagach district (one of the forth former regions of old Tashkent) between grandiose palace of arts “Istiklol” and Parliament of Uzbekistan “Oliy Majlis” Abul Kasim Madrasah is situated.

The madrasah was called after the honourable and high-educated townsman of Tashkent. This real historical person had a great influence on Tashkent life in the XIX century.  Abul Kasim eshon negotiated with Russian authorities during the occupation of the Kokand khanate, and defended residents of Tashkent during the uprising in the second half of the XIX century. Town dwellers often asked Abul Kasim for the advice, considering him as wise and educated figure.

Abul Kasim sheikh chose the remarkable place for the madrasah not by chance. In the 18th century some Muslims made a pilgrimage to Mecca, and brought few hairs of the Prophet Muhammad. It was decided to build a special room for the shrine. In 1850 Abul Kasim Madrasah was attached to the existent building. The construction of Abul Kasim Madrasah was built in the Renaissance style of the East in the first half of the XIX century. 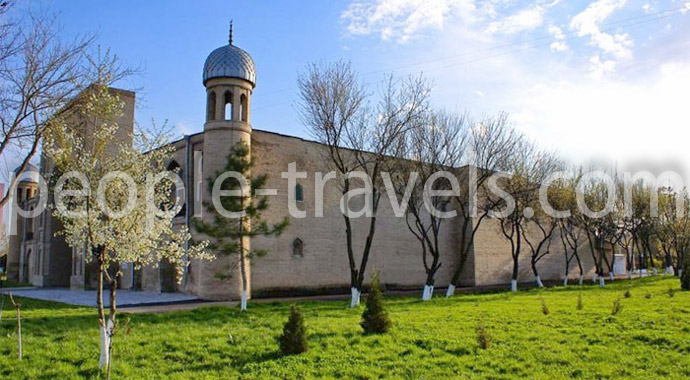 Up to 1974 Abul Kasim Madrasah in Tashkent served as a refuge for people fleeing the famine of the year 1929 from Samara province. Abul Kasim Madrasah was badly damaged and shabby, disfigured because of communal life. And after the earthquake of 1966 the madrasah was planned to demolish. There was a period of oblivion when the beautiful architectural monument for many years had been one of the workshops at the Tashkent factory of toys, gradually collapsing and losing its original appearance. But thanks to enthusiasts, Abul Kasim Madrasah was defended, and in 1981 the restoration of the monument began.

The facade of Abul Kasim Madrasah is decorated with magnificent lancet niches and corner turrets. Once in the center of the yard there was a well with cupola ceiling. Students lived in the cells (khudjra) that surround the courtyard in two tiers. Especially noteworthy is the fact that each cell was equipped with a separate sink, fireplace and stove for heating that was considered an absolute luxury for institutions of this kind. It is known that Abul Kasim spent more than 30 thousand roubles for the construction of the educational institution. Moreover he annually paid for learning of 150 students.

Among graduating students of glorifying Abul Kasim Madrasah in Uzbekistan were the novelist Abdulla Kadyri, the founder of Tashkent University Munavvar-kori Abdurashidkhonov and the famous dramatist Gulyam Zafariy.

Today in Abul Kasim Madrasah the Center of Applied Arts or Handicraft Association “Khunarmand” is placed.

Here you can see the works of skillful embroideresses – carpets, kerchiefs, scarves and bags, embroidered in national style.  The talented calligraphers and artists paint cupboards and lacquered boxes with various ornaments and oriental miniatures. Connoisseurs of metal products may appreciate the various metal objects with intricate carvings and engravings.

The result of this laborious task can be purchased by any desired person in memory of Uzbekistan.

Peopletravel Company is pleased to arrange a wonderful travelling around Uzbekistan, and in its turn is glad to offer various tours, listed bellow.