Monument of Tamerlane in all its splendor

Monument of Tamerlane in Shahrisabz in all its splendor 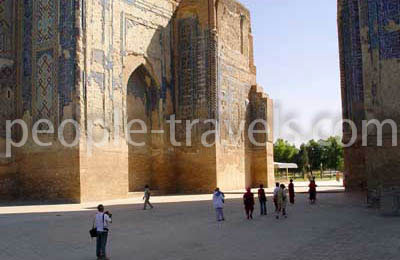 In Kashkadarya oasis in the ancient city Shahrisabz was born and raised famous ancestor Tamerlan. And one of the popular sights of the city is a monument of Amir Temur constructed by sculptor Ivan Jabbarov.

Its construction was attended by experts from different parts of our country. Many skilled craftsmen contributed to the monument as well as national artists. On the anniversary of Amir Temur worthy gift presented Samarkand, restored dozens of historic sites associated with his name. And there appeared large buildings and new parks. In the center was opened Amir Temur Square, where the majestic monument of Sahibkeran Tamerlan.

Scientific meetings and memorable evening, organized with the assistance of the Konrad Adenauer Foundation and the International Foundation of Amir Temur, held in Turkey, Iran, Kyrgyzstan and other countries. Under the auspices of UNESCO in Paris in April 1996 was a week dedicated to the 660th anniversary of Amir Temur. At the residence of the UNESCO conference and exhibition held on the topic "The flowering of culture and education in the Timurid era." The exhibition was visited by the President of France Jacques Chirac.

You will delve into the aroma of mystery of these beautiful cities through the Silk Road Travel. Discover the grandeur of old relics and monuments that cast a spell on every visitor. These sightseeing in Shahrisabz will draw you in Scheherazade’s tales and medieval legends.