Near Qok Gombaz mosque and the southern wall of the mausoleum Shamsiddin Kulol, by order of Ulugbеk was built tomb, known as the Gumbazy Seidon tomb.  It is located in Shakhrisabz, ancient city of medieval.

Small, single chamber building with elegant proportions adorns the blue dome, in which mosaic decorated with inscription. It was built in the style of the Ulugbеk era. The west entrance is adorned with moderate and rather extended doorway covered with deep carving with floral ornaments, in which are woven epigraphic inscriptions. 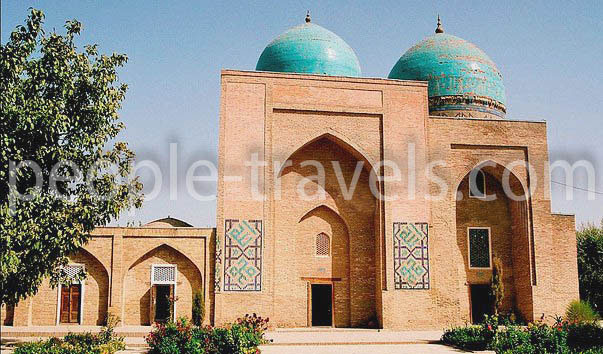 The lower part of the main hall of the monument adorned with blue hexagonal plates. Bowl and sails domes, arched niches and all the walls are covered with finest reddish and bluish paintings. Belt under a dome filled with geometric patterns, forming a shaped motive.

The dome is adorned with a complex multi-faceted image. Decoration between the arches painted with vegetable pattern and the plane walls are embellished with spirals. Through windows cut into the drum, the interior of the monument covered by shaded mysterious light, in which the dome seems to hover at an unattainable height.

Scholars have long been disputes over the ownership of burial in a building. At one time it was thought that Ulugbеk built a monument for the descendants of the Timurids. However, none of tombstones is located in the monument, there is no evidence that here was buried any of the descendants of Ulugbеk.

Among   marble tombstones belonging to the X-XVII centuries transferred to the tomb Gumbazy Seidon, four belong to the noble historical persons from Seyyid dynasty. It should be noted that in the second half of the XIV century Seyyids enormously helped Tamerlane in the struggle against the Mongol khans.

In particular, Аbu al-Muаli whose tombstone among others can be seen in Gumbazy Seidon directly participated in several battles and was a guest in the celebration of the ascension to the throne of Tamerlane.

This monument is one of the best architectural examples of oriental architecture.