The pearl of Shahrisabz

This complex arose after the death of the eldest son of Amir Temur, Jahangir in 1376. It has a domed mausoleum overlap in a cone and now the ensemble consists of several buildings - mosques, mausoleums, and facilities for pilgrims, three gates and tombs.

It is located in Shahrisabz and attracts numerous tourists to these ancient walls. According to one of the versions, the mausoleum was erected in honor of the saint Hazrat-Imam. The complex is also known tomb of Timur. It is assumed that the tomb of Shaykh Umar is on this site. The necropolis was a burial place of the Temurids aristocracy of the Barlas family.

Requirements assigned to the architect in the construction of the mosque were as follows. It should be covered shelter where many people must fit on the inside of the court shall be the cool place to stay Muslims (in hot weather). 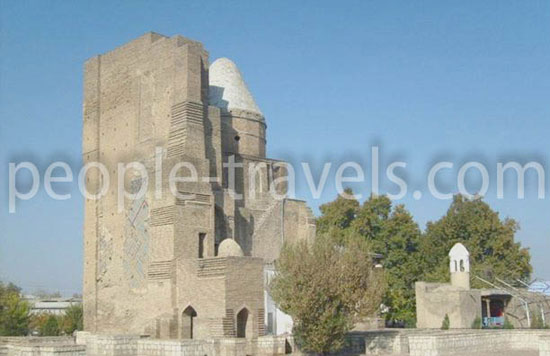 Such conditions are present in the mosque complex Sayyid Shalykarbaya. That is why here was constructed one summer and one winter mosque. Winter mosque is a monumental structure with nine domes, resting on four massive columns.

On three sides of the winter mosque has three doors, the main entrance installed in the wall on the north side aivan. Structures of necropolis were built at different times - IX to XIX centuries. Occupies a central place mausoleum was rebuilt several times.