Crypt of Amir Timur in Shakhrisabz

Planning your trip to Uzbekistan you surely should journey to Shakhrisabz and visit Amir Timur's crypt.

The crypt of Amir Timur, which, according to experts’ opinion, had been prepared by Amir Timur for himself, is located the other side of Dorus Saodat complex. The necropolis of Amir Timur in Shakhrisabz is a unique architectural construction. There is no a similar type of vault in all the Middle and Near East.

Amir Timur's crypt in Shakhrisabz was found by archaeologists in the middle of the XX century. The opened foundations show that over the Tamerlane crypt there was a mausoleum with a memorial mosque. 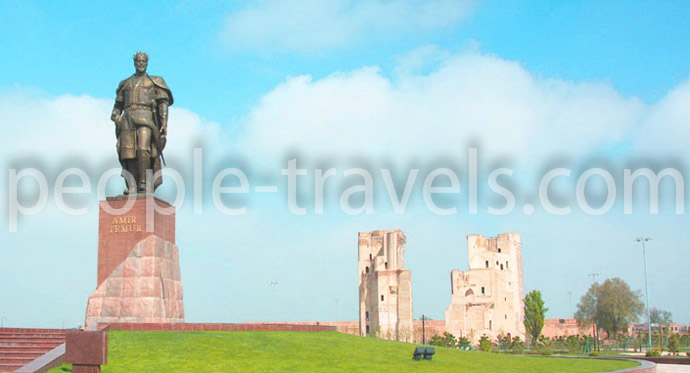 Amir Timur commanded to erect a crypt shortly after the completion of construction of the complex. The crypt of Amir Timur was located in the ground, and the entry to it passed through a luxury ground construction, built in the same style as the graves of his sons. Steep stair descent conducted in a cruciform room, the center of which was a room of the rectangular shape. Everything was trimmed quite modestly, that was not consistent with the disposition of the ruler. By all appearance, the building simply had not been fulfilled due to some unknown cause.

Walls, floor and vaulted ceilings, moulding a small cupola are made of slabs of white marble. On the walls, in the carved arches one can see ellipsoid medallions. 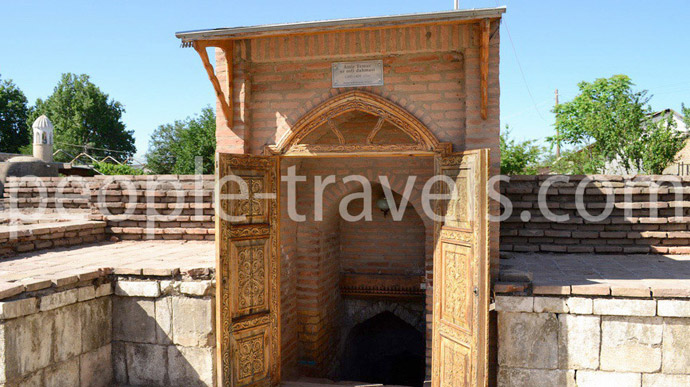 Architects and designers did not skimp in various imitation materials used for decoration of the internal space of the crypt. In 1933 and 1942 national archeological expeditions could ascertain manifold decorative inscriptions, sketches of various important events of that era.

The walls and arches of Tamerlane crypt in Shakhrisabz are carved with inscriptions "The supremacy belongs to Allah. Only Allah is eternal", "The good is in Allah’s hands, and He is mighty in everything". The first knowledge of the inscriptions was made by Y.G. Gulyamov in 1933. In 1942, the crypt became a subject of research of M.E. Masson and G.A. Pugachenkova. According to their hypothesis, the vault was designed for a single burial, which strikes with its strong solidity and extraordinary ostentation.

In the middle of Amir Timur's crypt one can behold a marble sarcophagus covered with a heavy monolithic slab, the thickness of which is exceeding 10 cm. In the centre and corners of the gravestone there are steel rings for its installation. On the slab the epitaphs, consisting of messages related to Timur and his life, were depicted.

Amir Timur’s life was lost in 1405 during the campaign against China. He was not buried in Tamerlane crypt in Shakhrisabz that was meant for him, but was interred in Gur Emir mausoleum of Samarkand.