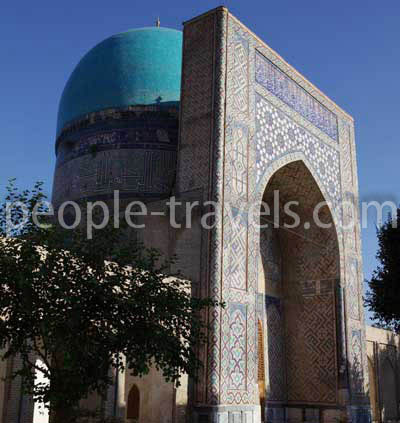 Along the main axis of the beautiful carved door is Kok Gumbaz with a simple shape tombstone paneled wonderful green. Stalactite domed tomb is covered with majolica inside and elegant ribbed outside. North wall has a decorative entrance portal. Northwest corner of the building is a mosque, rectangular in plan, with four niches. To place a dome space spanned by two arches between two arks that formed a square base for the inner and outer domes. All the arches are covered with stalactites. Small tiled mihrab carved mosaics.

Of the plan shows that the center of the composition is a huge domed hall, intended for public meals.

There was a bronze cauldron, crafted in the late XIV century. On three sides of the central hall was attached to different areas of economic and ancillary character.

Currently, the portal Shahrisabz this stately building remained one tower, inside which is the tomb of Imam Havreti. For thirty years, Timur Samarkand completely transformed. The city was surrounded by mighty walls with six gates.