Outstanding luxury of Temur and his dynasty

Aksaray was constructed by order of Amir Temur after his campaign to Khorezm. Estimated start of the monument is 1379 and currently preserved only two separate input portals, the height of which more than 40 meters.

The entire surface of the northern facade is decorated with mosaic patterns. Whimsical composition of geometric patterns and different colors imitates Oriental rug. According to the plan of medieval architects, Aksaray is an elongated rectangular building, with a yard that had dimensions of 125x240 square meters.

From the memoirs of the Spanish ambassador Clavijo, it was a three-part building, which consisted of the administrative part, reception, garden and yard with side-story building for housing.

Eloquent poetry and prose texts were made in the form of inscriptions, applied to different parts of the Aksaray portals. They captured the sentiments of the royal power; it is due to the governor against citizens and for the benefit of his possessions, relate about the passing of power.

Now only inscriptions of the northern fa?ade preserved that are located in the southern wall of the Aksaray portals. The text is placed in the box, written in Arabic handwriting with white letters on a blue background. 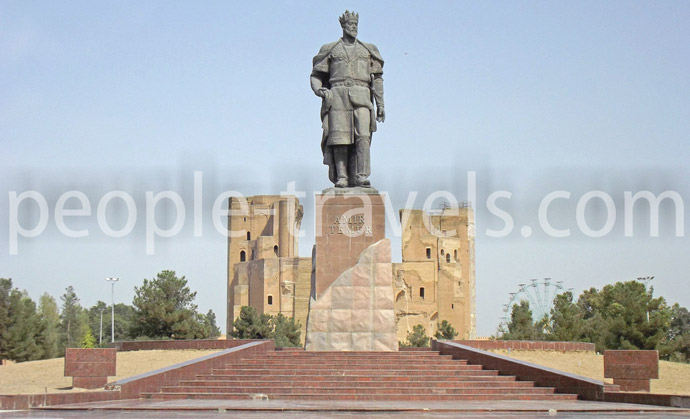 Timur palace Ak-Saray is admired by visitors for its sumptuous decor. Shining armor is covering its arches and walls. The facade is decorated with ornaments of large geometric shapes made with glazed bricks of blue and white. Elegant carved mosaic and majolica adorns niche portal. Here there are inscriptions from the Koran handwriting Suls. Tile mosaic combination of blue and green, even red and yellow colors covers the walls of the palace area.

Nowadays, a huge proportion of the wealth of the palace decor is unfortunately lost, but government is trying to support and preserve the remaining luxury. From high monumental gates there were only two pylons on which they were attached. On the former site of the garden there are beautiful fountains and pool covered with sand deepening.