This madrasah is located in the main square of Samarkand – Registan. It was constructed in 1417 during the reign of Ulugbek.

Great scientist, astronomer and mathematician, Ulugbek, being a grandson of Tamerlane, ruled the country for forty years, and during that time the Samarkand city has gained fame as a Science Center of Middle Ages.

Ulugbek was born in 1394, in one of the military campaigns of his grandfather, Amir Temur in Soultaniye that between Sogdiana and Iran. Since childhood, the boy surprised his surroundings excellent memory and desire for knowledge. 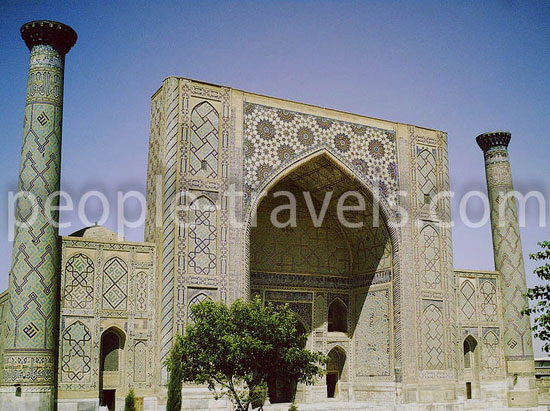 With the advent of Ulugbek began the heyday of science and culture. In Registan Square Ulugbek had ordered to build a "madrasah that would be unequaled in beauty and proportions of proportionality has not been all over the world." In this madrasah studied more than a hundred students and taught outstanding scientists - Rumi, Jamshid Kashi Kushchi Ali and many others. At the court of Ulugbek, despite harsh Islamic law he reined easily.

In Ulugbek Madrasah, in addition to the whole galaxy of famous scientists (Kazi -zade Rumi, Maulana Kashani, Maulana Kushchi) were read the lectures on mathematics, geometry, logic, science, astronomy (including astrology) reduces the exercise of the person and theology that was taught by Ulugbek himself.

Madrasah planned for canon with a courtyard and a huge peshtak overlooking the square. The architect of this building is unknown, though known contemporary message Ulugbek - historian Vasifiy that they had Kamaleddin Muhandis, student Kazi -zade Rumi. Also you can visit other places in Uzbekistan. 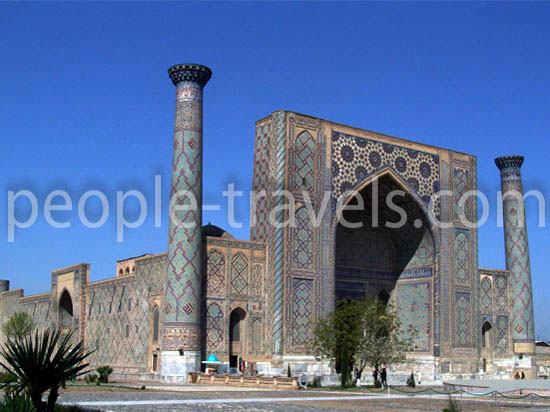 Ulugbek Madrasah is a closed rectangular courtyard, the back side of which was occupied by a mosque audience. In the corners of the ensemble rose 4 minarets. Around the courtyard were two tiers of open arches outside that protected fifty - cells hujras, in which lived more than a hundred students enrolled here.

Rear wall served as the entrance to the mosque. Portals are the most remarkable elements of construction. They have purely decorative function only for the imagination of monumentality and grandeur. This impression is achieved by a very simple method - exaggeratedly large size door niches.

For all its monumentality, the building gives the impression of lightness and grace. Small decorative ornament, coloring the walls blue tiles, eliminates the idea of gravity masonry. Slender cylindrical minarets repeat the ever blue sky Samarkand.