The part of magnificent ensemble in Samarkand

Near Sher Dor was built Tilla Kori madrasah (1646 - 1660 gg. ) on the north side of the Registan Square. Tilla Kori Construction began ten years after Sher-Dor, but Yalangtush, the ruler of Samarkand in that time, died without seeing its completion.

This monument is part of a unique ensemble of Registan Square. In the XIV-XVII centuries Registan was trade, crafts and cultural center of the city. It was here in 1417-420 gg. Ulugbek erected his madrasa where he taught astronomy.

Two centuries later, after the collapse of the Timurid state and the capital was moved to Bukhara. And Samarkand emir Bahadur Yalangtush decided to put two more madrasas in Registan Square.

Some researchers have found an affinity with ancient motifs painted due to Zoroastrian canons. For example, it explains the appearance of swastikas in an ornament, in addition, according to one hypothesis tiger lion in the ornament is an allegory about life after death as in Avesta religious hymns.

Majolica tiles still retain the quality and color of the glaze. On the walls everywhere sealed quotations from the Koran.

However, Samarkand ruler did not fail to glorify himself. Among the sacred texts inscribed the laudatory dedication in his honor and not in Arabic the language of the sages and Farsi spoken by subjects.

Disproportionately large size of the dome led to the fact that within a few decades the building was to fail. From time to time it was restored and updated, but as the decline of Samarkand the restoration became rare action. By the end of the XIX century madrassas stood almost deserted, and in the 20-ies of XX century it was inhabited by stray dogs. 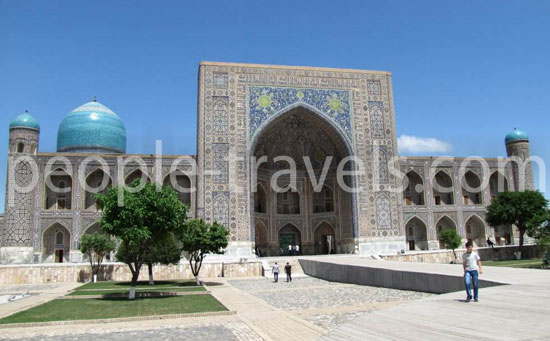 But in the late 40’s - early 50 -ies restoration began and walls and mosaics were made by the ancient technology. Particular attention was paid to the mosaics of the main portal.

Figure almost completely erased, and the bottom was impossible to discern any shapes. Restorers saved this incredibly beautiful mosaic from further destruction. Whole year research work conducted on the scaffolding, and archived at the drawing board.

Restored fragments of an area reached about 100 square meters. Finally, the fall of 1962 restoration was finished. Madrasah presented itself to its former splendor of its multicolor majolica. This magnificent ensemble of three madrasah is a unique example of the art of town planning. You can see whole beauty of this place whitin tours to Uzbekistan by Peopletravel.