The symbol of power of ancient city

If you are planning the trip to Uzbekistan, it's better choice to visit Samarkand. Among cities of the world Samarkand is one of the oldest. Its history goes back more than 2500 years. Samarkand became the capital of the largest Central Asian states.

No wonder that in Samarkand survived to this day a lot of monuments related to different epochs such as the mausoleum of Bibi Khanum, Ulugbek observatory, the ancient site of Afrasiab, etc. And among them Sher Dor holds a special place.

Sher Dor can be translated as lions from Persian language. The construction of this madrassah began in 1619 and lasted over 17 years, ending in 1636. Author of the project was the architect Abdul Jabbar. 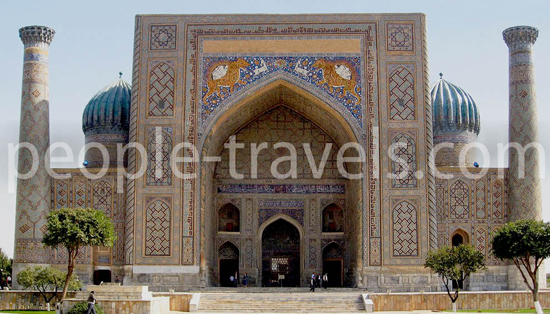 Monumentality and elegant drawing mosaic motifs of large and small forms, clarity symmetry - all this puts Shep Dor on a par with the greatest ancient monuments of the city. In the beauty tiled finishes the madrasas is unmatched among other in Samarkand.

The height of its minarets reaches almost 40 meters. During the construction of madrasas have started the era of decline of Samarkand, but the study of Sher Dor suggests a high level of skilled builders and artists. The building is at the same axis with Ulugbek Madrasah and in the corners of the main facade located minarets.

On each side of the portal arch shows a mosaic image of the sun with a human face and a lion catching a deer. It was after this picture building got its name. The decoration is dominated by a carved tile mosaic. Besides this the portal shows the symbols of power in Samarkand leopards with the sun on the back.

The interior decorated traditionally according to religious buildings of Central Asia and Iran. Preference in the decoration was given to the color blue. For many visitors the large tympanum will be of particular interest, it is located above the portal arch - lion that rushes behind the white deer.

In the form of a white disk with a slanted almond eyes depicted the sun that is bordered by a golden glow. All of this composition is on a blue ground with round-shaped shoots bewitching tones and scattered with flowers. Images of people and animals are characteristic of Persian culture that was dominant in the our region.