Not far from Afrasiab settlement on the upland of Samarkand city the Mosque Hazrat Hyzr looks grand and bewitching. The mosque is situated near the memorial complex Shakhi Zinda and the local bazaar “Siab”.

The ancient Mosque Hazrat Hyzr got its name in honor of the legendary saint and eternal pilgrim Hazrat Hyzr, the cult of which goes back to pre-Islamic times. Hazrat Hyzr considered as a saint, symbolizing life and immortality; as a patron of travelers, bringing luck in trade.

There are several legends about Hazrat Hyzr and the construction of the mosque. 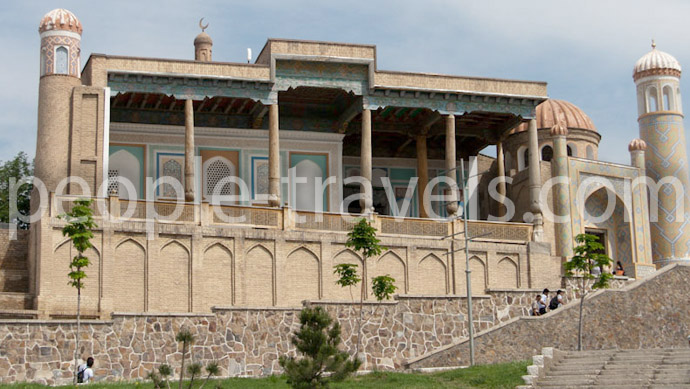 Another story tells, that Kuteiba ibn Muslim, the Arabian commander who won Samarkand in 712, decided to build the mosque here. He could not select the proper place, and then the Saint Hazrat Hyzr came into his view and pointed this area for the mosque. When the construction was completed the old man came one more time to point the deficits, as the mosque and mikhrab (a niche in the wall of a mosque that points to Mecca) were directed wrong. As the legend tells, Hazrat Hyzr laid the foundation stone.

Many years ago people came here to ask the venerable old for a lucky ending of the trip, harvest and other everyday necessities. Besides the religious construction, near the Hazrat Hyzr mosque there are several important objects. For example, the old aqueduct Argiz, through which the life-giving moisture came to the city. In due course, the well dried up, but in September 2002, the reconstruction work was carried out. Today the well has the origin look with clear water. The depth of the well is 40 meters.

According to the historical data Hazrat Hyzr mosque is the oldest mosque in Samarkand. It was built after spreading Islam in this area. However, having stood for centuries, the mosque was razed by the Mongols, like the rest of Samarkand. And only in the 19th century the Mosque Hazrat Hyzr was reconstructed in the old place. Of course, it looked quite different, because it took more than a thousand years after the construction of the original mosque. Right up to present time the building has underwent several changes.

The Mosque Hazrat Hyzr was built in the first quarter of the 19th century. It is a fine example of folk architecture of Samarkand of that era. Externally it is quite different from the buildings erected in the era, such as Amir Timur, which gives it a special identity.

The first thing that caught one’s eyes is a memorial plaque with an inscription that the mosque last restoration was held under the tutelage of Islam Karimov, the President of Uzbekistan. Now the Mosque Hazrat Hyzr really looks very bright and colorful, and shining in different colors.

The Mosque Hazrat Hyzr has the high foundation with arch niches of iwan (arched premises). The columns support richly decorated and ornamented shed. Inside the khanaka (religious dwelling place), which has a square shape, one can see the mikhrab, indicating the direction of Mecca. On both sides there are small prayer rooms.

But the real adorning of the Mosque Hazrat Hyzr is a wonderful portal, gates of which are decorated with skillful carving. Nearby there is a so-called eastern minaret.

The painted dome of the mosque is inexpressibly beautiful. In the interior of the Mosque Hazrat Hyzr the wall painting and flowery unusual mural are prevailing. You can also see many dates, which indicate the historical events.

As Hazrat Hyzr mosque stays on the hill, a wonderful view of Samarkand city is opening from the terrace of the mosque. And the traveler will have a great opportunity to trip to Uzbekistan with Peopletravel Company and see this peculiar and attractive mosque.