Mausoleum of Ishratkhan: prehistory, construction, décor and planning of the mausoleum.

Amir Timur, fully resolved to create the majestic city, ascended the throne. Having gathered skillful masters, he began a great constructive work, in the course of which the whole list of monuments arose. And even today we can admire their grandeur and uniqueness.

Among the monuments of Timurids’ epoch in Uzbekistan the picturesque and refined Mausoleum of Ishratkhan takes a special place. 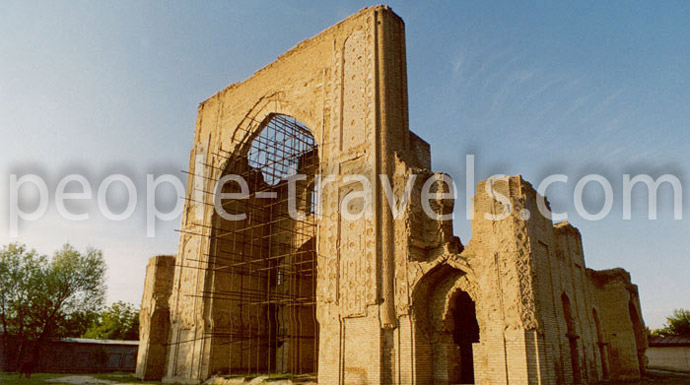 The Mausoleum of Ishratkhan is located in the South-Eastern part of Samarkand, to the North of kubba (place of burial ground in Islam) of Abdi Darunee. At the times of making Samarkand this place was the outskirts, where numerous vineyards and orchards were situated. Rich people of Samarkand built luxurious homesteads and villas in these gardens. Even today the historians argue about, what Ishratkhan is, a palace or a mausoleum. But there are exact dates that the Mausoleum of Ishratkhan was constructed in the XV century by order of Khabiba Sultan, wife of Abu Said.

«Ishrat-khana» means «house of joy», that share the idea of «everlasting house for heavenly life»

The Mausoleum of Ishratkhan is a building of the second half of the XV century, with a large portal and high central hall, above which in the beginning of the XX century the dome was. Under the hall there is a vault with 23 burial places of women and children.

On the facades of the Mausoleum of Ishratkhan against a background of burnt bricks bright blue framings of mosaic were shining as embellishments. The interiors were richly adorned with solid décor and various significant segmentations of arches. In the central hall and other rooms of Ishratkhana the progressive constructions of ceiling on four crossing arches were used. In the central hall the panel was decorated with mosaic revetment with slight vegetable pattern and glaze golden painting. Upwards of the panel the surface of walls and arches was covered with the painting named «kundal» with golden relief details.

The floor of the central hall and vault was flagged with marble flagstones, and in the other rooms the floor was bricked.

The Mausoleum of Ishratkhan is one of few monuments in Central Asia which is cloaked in mystery if it’s building, real purpose and discussions of scientists.

There is a legend about the Mausoleum of Ishratkhan which explains the abandonment of the building. Ulugbek calculated, thanks to horoscope, the forefather who was in danger. During the feast of Timur Ulugbek busted into the hall, riding on the horse and handing the exposed saber. People scattered, and when the last emir left the hall, the earthquake occurred. Ferocious Timur forgave Ulugbek’s deed, because Ulugbek saved his life. Since that time the building of Ishratkhana has not been mended. 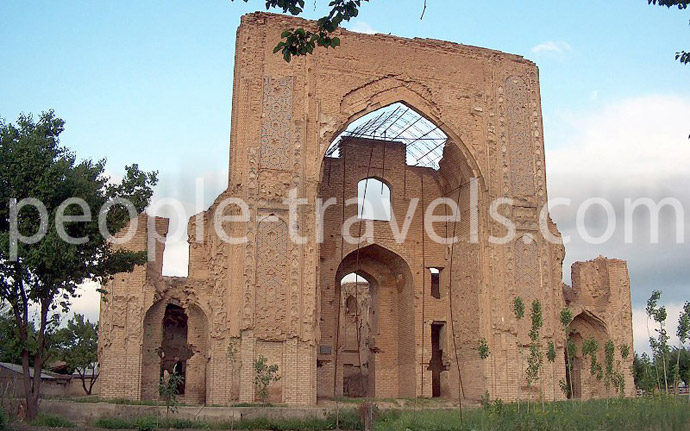 Having chosen a trip to Samarkand with Peopletravel Company, you will see the unique architecture of the Mausoleum of Ishratkhan and open slightly a curtain of mystery of this masterpiece monument.