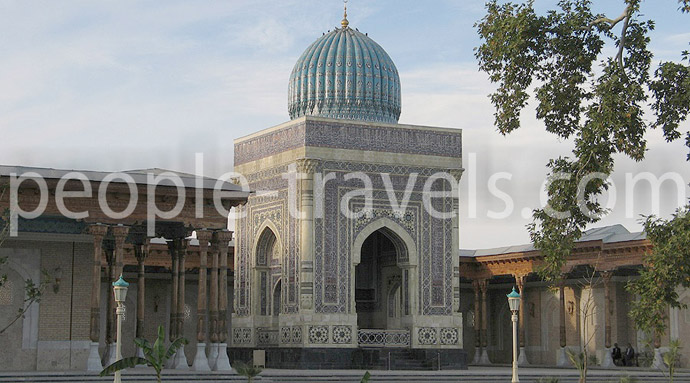 The memorial Complex of Imama al-Bukhari is situated in 12 kilometers from Samarkand, in Khortang village. The landfill of the prophet is considered a sacred place. And visiting the tomb of Imam al-Bukhari has the same status as Umrah (small pilgrimage to Mecca - hajj).

The history of the Mausoleum of Imam al-Bukhari

In the XVI century during the governing of the Sheybanids’ dynasty on the village cemetery at the outskirts of Khortang the first memorial complex was constructed. The Complex of Imam al-Bukhari included small mausoleum above al-Bukhari tomb and Juma mosque. Such a view the complex had until the beginning of the XX century. And in 1997 at the period of Uzbekistan independence in connection with the forthcoming 1225 anniversary of Imam al-Bukhari it was considered to renew the memorial complex above the grave of the honorable religious scholar.

The Complex of Imam al-Bukhari takes the area of 10 hectares. The entrance to this remarkable sight is brought via the one-storied building from baked brick. The building includes three portal domes with through arched passages. 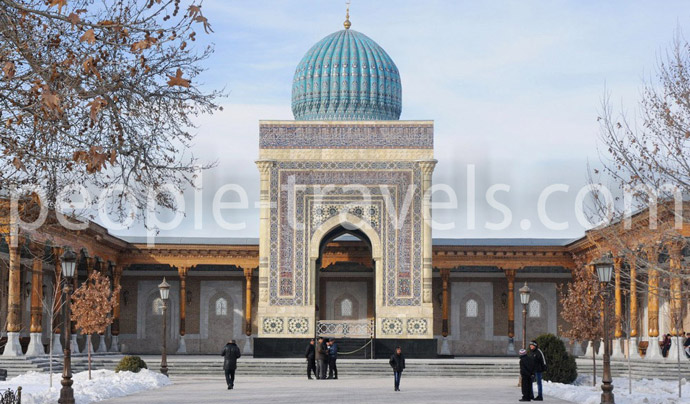 To the left of Imam al-Bukhari’s Mausoleum there is a mosque with khanaka (dwelling place or cloister). The mosque seats 1,5 thousand of the believers. To the right of the entry one can see the administrative building with the library and museum, where rare manuscript and lithographic books on Islamic theology are exposed.

Near the Mausoleum of Imam al-Bukhari there are centuries-old plane trees. They were planted many centuries ago and till today they gladden the eye of visitors of the complex. Moreover, there is a belief, that having touched planes and having made a wish, it certainly would come true. Among planes there is a spring, water of which is considered healing.

You will have a chance to observe the architecture of the Mausoleum of Imam al-Bukhari together with Peopletravel Company. Having booked a tour to the mausoleum you will know much amusing about Imam al-Bukhari’s biography.

Imam al-Bukhari’s parents were well educated people, expatriates Persian. Abu Abdullakh Mukhammad ibn Ismail al-Bukhari (full name of Imam) from his childhood was smart and had a unique memory. At the age of seven he learned the Koran, and when Imam al-Bukhari was ten he knew from memory several thousands of hadiths (stories of Prophet Mukhammad’s words and deeds).

When Imam al-Bukhari was youth he spent four years in Mecca after Hajj. He visited famous at those times the Islamic centers of science. They are Baghdad, Basra, Balkh, Egypt, Damask, Khidj, Nishapur and Medina. Imam al-Bukhari learned everything from the most famous mukhaddis (the Islamic scholars) of that time. 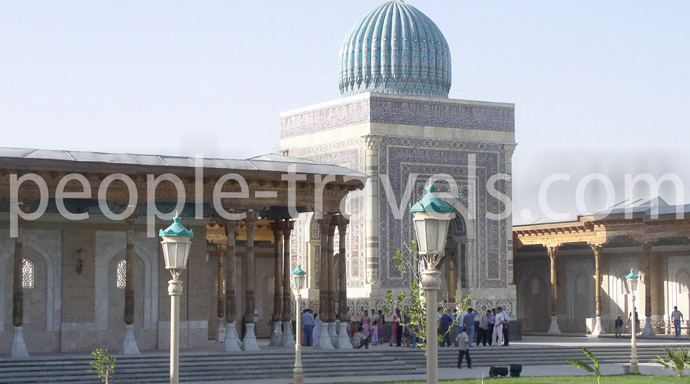 Imam al-Bukhari devoted the whole his life to gaining hadiths. He wrote 200 thousand of hadiths from his spiritual leaders and tutors. From this large quantity of hadiths (800 thousand) he joined the most reliable, they are 7275. These hadiths composed his book “Sahih al-Bukhari”, which became the most popular among the other collected works. This book is one of six main sunni collections of hadiths. Some theologians consider “Sahih al-Bukhari” the most reliable Islamic book after the Koran.

However Imam al-Bukhari down the stream of his life often was a victim of discord and conspiracies. As a result for 4 times he was banished from Bukhara. So, in the last years of his life he was obliged to leave Bukhara and settle down in Khortang. Imam al-Bukhari went aloft in 870 and was buried in Khortang village, near Samarkand.