In Samarkand there are many places dedicated to prophets and sheikhs. Let’s start our trip to Uzbekistan with the ensemble regarding to the great sheikh – Khodja Akhrar. On the south-western outskirts of Samarkand near the old cemetery Djakerdiza there is the architectural Ensemble Khodja Akhrar. It includes madrasah, summer mosque and dakhma (mausoleum) with the tomb of Khodja Akhrar. In the middle of the yard there is a big pond – khauz.

The foundation of the ensemble Khodja Akhrar in Samarkand is connected with the activity of the head of the religious Naqshbandi order in the second part of the XV century Khodja Akhrar (Nasyr ad-din Ubeydallakh). He was born in the mountain village Bagustan (near Tashkent). In 1426, when Khodja Akhrar was 22 he for the first time visited Samarkand. Khodja Akhrar influenced politics of Timurid states due to his spiritual authority. During his life Khodja Akhrar became honored not only by the common people, but considered the scholar of many governors.  One of his achievements was abolition of grave taxes in Mawarannahr (Transoxiana). 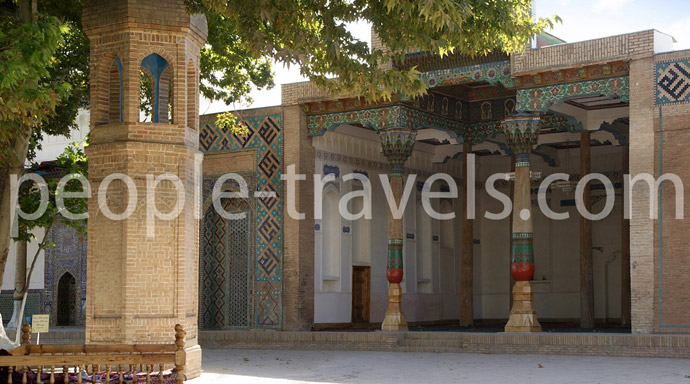 In XVI century near the landfill of Khodja Akhrar the holly cemetery started to appear. Round the burial vault of  Khodja Akhrar the special dakhma for group interments was built. Here the column iwans (arched room), mosque halls of different times were constructed. There is also a small minaret built in 1909 by the architect Sagdulla.

On the cemetery many marble gravestones with ornamental carving of epigraphic kind remained. The white marble grave stela of Khodja Akhrar with multiline Arabic ornate lettering is especially notable.

The construction of the madrasah by Nodir Divanbegi exactly on this place tells about big respect and honoring of Khodja Akhrar Vali. Very often the madrasah because of its location was called Sari mazor (“beginning of the cemetery”) or Khodja Akhrar madrasah. During the construction some elements of planning were borrowed from madrasah Sherdor  in Samarkand. The depicting of tigers on the portal without the sun gave to madrasah the second name – “Sherdori berun” (out-of-town Sherdor). The monument served in a destroyed view. The inner portal leaned for one meter and could fall. The roof and arch were cracked. The revetment in the upper part of the entrance eastern portal disappeared in the beginning of the XX century. In 80-s of the XX century the restoration campaign in the madrasah began. For the reconstruction of the outside appearance of the madrasah many archival materials were studied.

It can be said that holiness of Khodja Akhrar and respect with which the local people treated, became the basis for building this architectural ensemble Khodja Akhrar in Uzbekistan. As many years ago, pilgrimages come here to obtain soul peace and find solitude in this blessed place.