Central Asia is a storehouse for lovers of old oriental architecture. The gem of Samarkand is considered to be Gur-Emir Mausoleum, erected by order of Amir Temur in 1404. The construction was associated with a sad event: the death of the favorite grandson.

Gur Emir, including madrasas and Hanako, was reunited 4- yard quince with very tall walls, minarets at the four corners and marvelous beauty portal, decorated with carved mosaic. Everyone knows that Temur always craved scale in construction. He belongs to the following saying, explaining its nature: "If you want to know about our power - look at our buildings." Gur Emir differs with its monumentality, but this is the beauty, for such volume elements only emphasize the greatness and power of its creators.

In 1425 Ulugbek set over the tomb of Timur headstone of dark green jade, revered by the Chinese. Plate brought from China during the victorious campaign grandson of the king of kings. Historians and researchers agree in opinion that Ulugbek not completed the construction and finishing of the mausoleum. 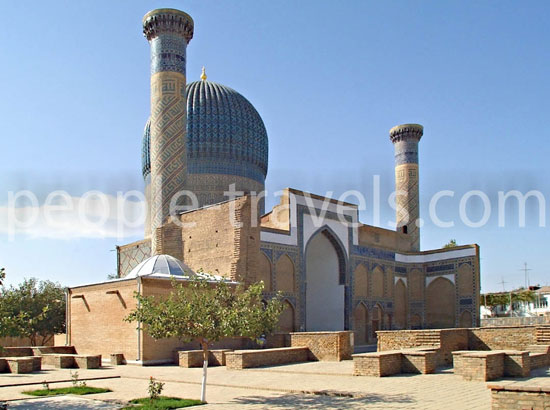 He ordered to build a gallery to login. Through it now thousands of tourists annually visit the tomb Timurids. In 1447 Ulugbek carried his father's body from Herat (now Afghanistan) and with honors made a deposition to his family tomb in Gur-Emir.

A great astrologer and master of India, China and the Middle East, the boundless steppes of Siberia he also found their eternal resting place here, at the foot of famous grandfather , Amir Temur. The biggest tombstone of mausoleum erected by Mir Sayyid Bereke, spiritual director of Temur.

So revered and respected man, Tamerlane did not remain in history as a bloodthirsty conqueror, but as a fan of science, art and religion. We should also notice about great influence of the spiritual father to unscrupulous commander.

The guides always tell the tourists in the tomb written the following words: "This monument is perhaps no burial structure of Central Asia, generates high thoughts about the greatness of human affairs." 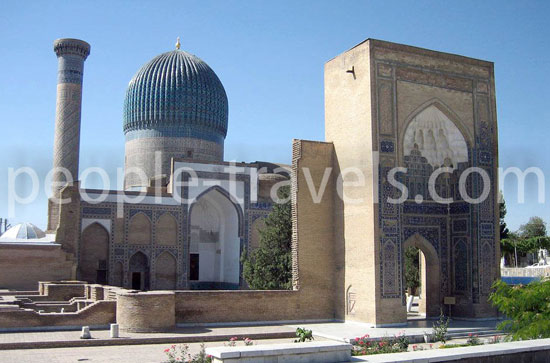 In June 1941, on the personal order of the USSR leadership tombs were opened, including Tamerlane's Tomb. Scientists have proven that there really are buried Temur, Ulugbek, Shoxrux, Miranshah and Muhammad Sultan. Anthropologist Gerasimov restored them by skulls portraits checks. Thanks to him, the whole world knows the face of the greatest military leader of all time Amir Temur.

The opening of graves showed that Muhammad Sultan Temur and were buried in wooden coffins, others - in the sarcophagus. It was also found that the body is subjected to the king of kings embalming. A grave Ulugbek autopsy proved legend of his death: he was beheaded on the orders of his son. He has accepted resignedly muchenecheskuyu death of a martyr under Sharia law was buried in the clothes in which his death has found. If you intend to travel to Uzbekistan you must visit this beautiful place in Samarkand.