Cave of Hazrat Daud in Samarkand

The cave of Hazrat Daud is a holly place and pilgrimage site not only in Samarkand but in whole Uzbekistan. Hazrat Daud cave is located on the territory of Aksay village, in Mirankul mountains, to the South-West from Samarkand. It's just a stone's throw from Samarkand.

Every day tens of pilgrimages attend this place cherishing hopes for getting divine grace and encouragement from Saint Daud.

Who was Hazrat Daud? And why is he so honorable among the faithful.

Hazrat Daud among different nations and confessions is also known as Hazrat Dovud or Saint David. Hazrat Daud in Islamic religion was a prophet through whom the sacred Zabur (the holy godsent book to Daud) was revealed.

There are several legends of Saint Daud's cave. One of the histories of Hazrat Daud Cave tells that prophet Hazrat Daud was sent to these places to propagate Islam. The people confessing Zoroastrizm were angry with the prophet. Hazrat Daud was a fair man and Allah gifted him a possibility to fuse metal in his hands. The Samarkand sovereign decided to make Daud work for him – to forge swords and spears. The prophet knew about this and ran to these places. Allah made the mountain clay, let Daud in the mountain and closed the entrance. 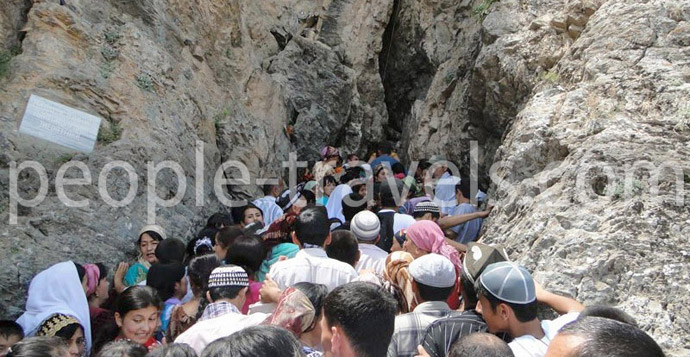 There is another version of how the cave of Hazrat Daud appeared. Daud was looking for a place in order to rest before the battle with Goliath (fighting man of unbeliever’s army). Jinns (in Islam kind and evil ghosts) transferred Daud to the mountains not far from Samarkand. But ifrits (demons) found out Daud and brought Goliath to the mountains to Daud for fighting. Having realized that he is not yet ready, Daud began praying. He asked Allah to hide him, and then large rocks appeared in front of him. Daud began digging the stony mass. The mountain became soft as wax.  He went deep into the rock, leaving the Goliath, striking his club and the rock underfoot. According to legends, the traces of the giant knees and fingerprints at the entrance of Hazrat Daud cave belong to Goliath.

The cave of Hazrat Daud is a 30-meters tunnel, the width of which is from 0,5 to 4 meters, and the height is 15 meters. At the end of the tunnel one can see prints of arms and foot of Hazrat Daud. And moreover there is a popular belief that having touched these prints and having made a wish, it certainly would come true.

To get to this sacred place the pilgrims overcome the hard way in 2000 steps. At the top of the Mirankul mountain the ancient mosque is located. The mosque is very small, but every pilgrim prays in it before coming to Hazrat Daud Cave.

Hazrat Daud cave near Samarkand is of great interest among tourists, and Peopletravel company will willingly offer and organize the trip to the cave of Prophet Hazrat Daud.