While visiting Uzbekistan you can see great number of beautiful buildings. One of them is Bibi Khanum Madrasah. It was built in honor of the mother of Tamerlan’s wife (Saray Mulk Khanum). The ruins of the octagonal cross-shaped outside and inside the mausoleum are an integral part.

High octagonal structure with a cylindrical drum, surrounded by a large Kufic inscription unpreserved outer dome. Inside the cruciform plan is faced with marble crypt with three female burials in sarcophagus.

Interior of the mausoleum is decorated with a mosaic panel and murals on the ceiling and walls, where, along with ornamental motifs introduced stylized landscapes. 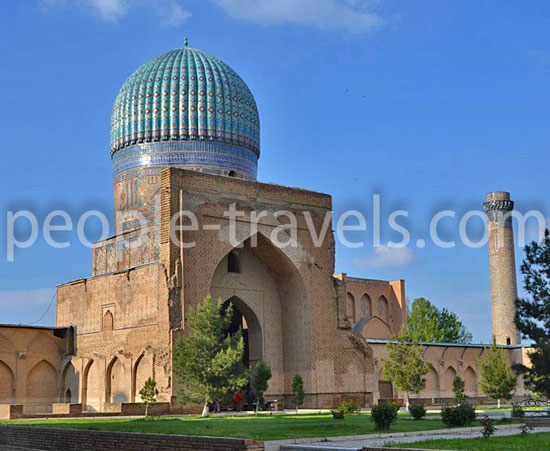 According to legend, the portal of the mausoleum was so great that he could compete with portal of mosque. It might not please the ruler Tamerlane and he ordered to rebuild the madrassas. However, during the invasion Nadir Shah the madrassa was destroyed.

It was said that the wife of the Emir Bibi Khanum conceived to return her husband to build a mosque in his gift, which never saw light. Minarets were built around a spacious courtyard of white marble columns, and competed with the blue dome firmament.

Returning from a long voyage, Timur was furious that his portal of the mosque was not as glorious as he wanted, and , in any case, lower standing in front of madrasas built by his principal wife Saray Mulk Khanum, the one that calls the legend Bibi Khanum. 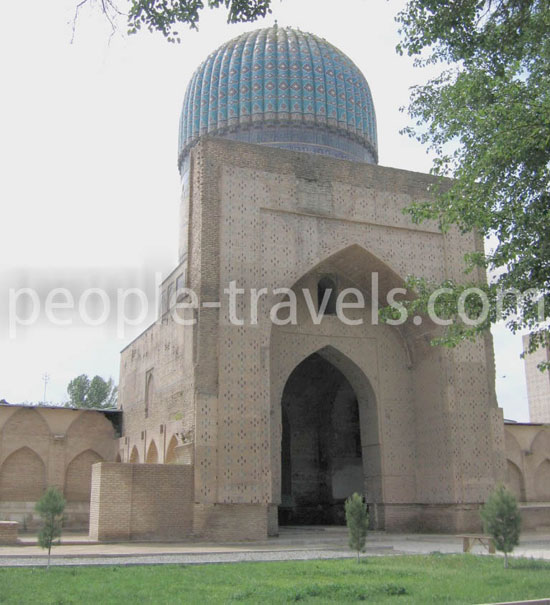 The composition of the Bibi Khanum Madrasah maintained in strict traditional scheme for Maverannahr : prism base drum cylinder dome. However, many of the new masters made outlandish. Octagonal prism base, the outer dome with gold paint - these are elements of Middle Eastern architecture.

Dome height reaches 12.5 m in diameter and at the base - 15 m; however, it does not look so huge. All thanks to the division on the edge, towards the drum. Decorated with turquoise dome is identified with the heavens.