Today there is much information about Samarkand, its origin as a city, its sights. A lot is known about the history of Samarkand, its rulers and its cultural heritage.

Many things became well known thanks to the archeological excavations and also the excavations on the settlement of Arasiab, which is located in the North of contemporary Samarkand, near Afrasiab history museum.

In the course of the archeological excavations the pieces of clay ornamental dish, terracotta statues, fragments of ossuaries, things from glass, various tools, and women adornments were found. The archeological excavations began at the end of the XIX century. Among many interesting objects the examples of highly artistic painting of VI—VII centuries turned out the uniqueness. Also during the process the coins of Greco-Bactrian period, bronze mirrors, sepulchral urns were found. 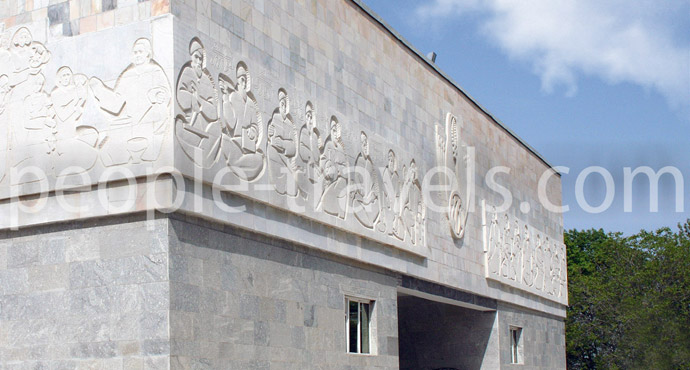 Aforementioned artifacts, found during the excavations on the settlement of Afrasiab and date from various periods of city history, are the exhibits of Afrasiab museum in Samarkand.

The official name of the museum is Samarkand History Museum Afrasiab.

Afrasiab Museum itself is situated not far from Afrasiab settlement. This place is indeed symbolic and important for Samarkand city. The ancient settlement stretches for about 200 ha, and according to some researches’ data the Sogdian capital Marakanda was in this point. Various artifacts of ancient period of Samarkand history are exhibited in the collection of Afrasiab museum. For today the range of the unique displays is more than 22000.

The collection of this remarkable museum tells us about the everyday life, mode, culture and traditions of people, which inhabited these regions since the advent of the human here. As it was said above, the finds, which were discovered during the excavations, allow to reconstruct the ancient look of the city, both manual and mental. All this is possible thanks to laborious task of scientists.

In addition to all listed above in Afrasiab museum collection one can see sewerage systems functioned long ago and remains of ancient people.

But one of the main gems of the collection in Afrasiab museum is undoubtedly the famous fragments of wall paintings of Samarkand palace. The palace belonged to the dynasty of the Ikhshids, which ruled in this area in 7-8 centuries.

In 1956 the archeologists managed to dig out the building remains. They saw practically fully saved wall paintings, depicting the way of life of royals. For example, the southern wall is devoted to the wedding embassy that came to Varkhuman. At the head of this motley and bright procession one can see the bride – daughter of Chaganian. She is riding the snow-white elephant. She is surrounded with dignitaries, courts and beauties which are running on hardy and graceful fast horses. The opposite wall narrates bloody fight between horsemen and wild animals. Here you can also watch the painted boats and people in. On the Eastern wall the sea, sailing people, beautiful birds and animals are depicted. And on the wall that was once behind the throne of the ruler, we can observe the scene of the reception of messengers from Chach, China and Eastern Turkestan. 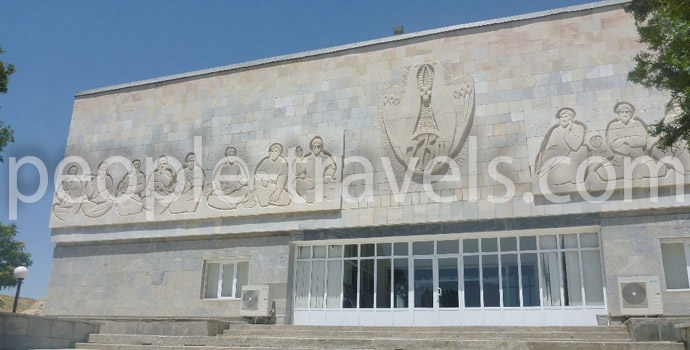 Today’s view Afrasiab museum gained in 1970. At those times on the place of archeological excavations the receptacle of invaluable finds was built. The architecture of the project was Bagdasar Arzumanyan .

Afrasiab museum of Uzbekistan was opened in connection with very important date – 2500 years to Samarkand.