To the East from Jizakh till Navoi city in the West, to the North-West from Samarkand, for more than 170 km. mountain range, called Nuratau mountains, is stretching.

Nuratau mountains in Uzbekistan belong to the Turkestan range, which starts in the depth of the Kyzyl-Kum desert.

Nuratau mountains consist of several ranges, calling Aktau, Karatau and Nuratau, which stretches from the river Sanzar till the meridian of Nuratau city. Nuratau ridge is very rocky, much crossed and little accessible for travel. In the West Nuratau ridge goes down and merges with the plane near Rabat-i-Malik. The southern slope of the ridge gradually passes into the sward-shaped foothills of the right bank of the Zaravshan river. The northern short slope passes into the pebble-shaped declivity. Between Aktau and Nuratau ranges there is the Nuratau valley, where in summer the climate is dry.

The highest point in Nuratau mountains is Khayatbashi mountain with the height of 2169 meters.

Nuratau ridge near Jizakh is bursted through the Sanzar river and forms the gorge, known as “Tamerlane gates” or Djilanuty. To the East from this gorge the ridge is called Malguzar. 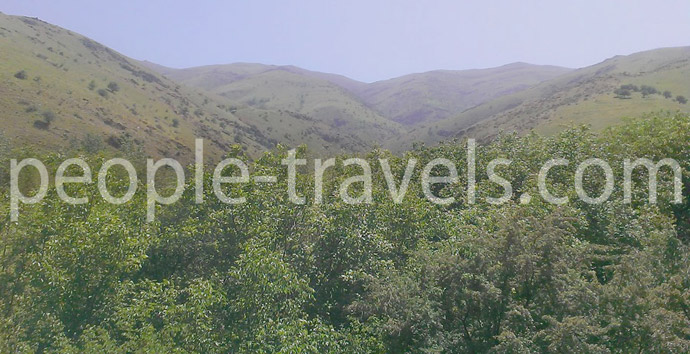 The gorge has the width of 120 – 130 meters. In one point the gorge is covered with two large rocks, forming the passage of 40 meters. The passage was named in honour of the great commander Amir Timur (Tamerlane). On the right rock of the gate one can see inscriptions in Persian. The inscriptions were carved by two rulers Ulugbek Gurugan and Abdullah-khan, during their passing through the gorge.

In the West of Nuratau mountains there is one more interesting site – Sarmish gorge. This place became famous due to numerous petroglyphs carved on the whole territory around the Sarmish-say river. This place is considered the anomalous zone. But the scientists explain this hypothesis by the presence of rare chemical elements, special climate and difficult landscape. This magic and little-studied area attracts not only scientists and ufologists but many travelers.

In the very heart of Nuratau mountains, at an altitude of 1650 meters there is a rare lake – Fazilman (Sarbast). The Fazilman is a closed lake which takes water from one spring. You may completely take pleasure the view of this lake during the period of spring and early summer. At this time Nuratau mountains are beautiful as in spring, and the Fazilman lake is especially full-flowing and picturesque. Further to this, the place is the perfect point for stars observation. The stars, reflecting in the water create the magic picture, especially in moonless nights.

On the highest points of Nuratau mountains fine view to the Aydarkul Lake opens.

The Aydarkul Lake is a large closed lake in the north-eastern part of Uzbekistan. The Aydarkul is the artificial water reservoir in the Aydar-Arnasay lake system, which take the general area of 4000 square kilometers.

The Aydarkul Lake is located far from peopled places. About 345 families live near the lake. That is why it is very quiet and calmly in this area. The lake has a great potential for fishery, nomadic stock-breeding and tourism as well.

Flora and fauna of Nuratau mountains

The area of Nuratau mountains is inhabited by unscarred animals. During traveling in Nuratau mountains you can often observe partridges, hares and foxes. Having reached the Aydarkul Lake, you can walk around the alpine steppes and climb to Sarbast peak, from which the splendid views to the Nuratau mountain system open.

Having stopped at the village Madjerum, you can see the Madjerum firtree. Its age is more than 1500 years. Local people consider this fir sacred. The majestic and large tree, reaching in girth 24 meters, can fulfil your wishes.

We can tell about inimitable in its beauty Nuratau area without end. But it would be better to visit Nuratau mountains and see them with your own eyes.