There are many wonderful and unique reserves. Everything, including mountains, rivers, trees and animals live their special natural life. Very often this land of plenty is located in the area where the foot of man has never trod.

Nurata natural reserve in Uzbekistan is one of these pearls. Nurata reserve is located in the western part of Djizak region (Farish district, Khayat village), on the northern slope of the Nuratau ridge.

Nurata reserve was organized with the aim of saving the population of rare type of animal - Severtzov wild ram and valuable diversities of walnut. Another name of the reserve is Nurata mountain and nut-bearing State Reserve.

The area of natural reserve in Nurata is 22537 hectares, 2391 hectares are covered with forest. The northern slopes of the ridge are rocky and steeply go down to the bordering plane. Difficult mountain relief has the absolute altitude over sea level (from 400 till 2100 meters). The highest point of Nurata natural reserve is Khayat-Bashi pick (2169 meters). Ten large and small streams are crossing the reserve. They are running towards Aydar saline land.

The climate in natural reserve in Nurata is dry and sharply continental. The average annual rainfall is less than 400 mm. The maximum temperature in summer (July) is + 43o, in January it drops to - 29o, the average monthly relative humidity varies between 24 - 72%. Soils of the reserve are presented with brown mountain-forest and dark gray soils. The rocky zones under the influence of weathering acquired the bizarre sight.

Only here in high mountains of Nuratau ridge one can see how easily and gracefully from the top to the top, one after another mountain handsome sheep, crowned with twisted horns jump. Then having huddled in a flock, they freeze for a moment, as if listening, and looking closely at you.

By the way, at one time, because of the reduction of the population of one of the smallest subspecies of wild mountain sheep in this area the nature reserve was established. It all began with the fact that the specialists of Nurata reserve tamed two heterosexual lambs of wild sheep. Especially for them, in 1987 an aviary was created.  The lambs were put here to observe their lives and explore their breeding in captivity. First the lambs were fostered with milk, and when they began to nibble grass by themselves, they were let out of the aviary. This couple gave offsprings. And now this family has grown and increased. Today, in this half-wild sheep flock there are more than a dozen heads, listed to the International Red Book and Red Book of Uzbekistan.

The animal kingdom of Nurata reserve is very rich and does not stop to astonish with its diversity. There are 816 types of insects, 240 varieties of butterflies and 241 kinds of bugs and other types of dipterous and hymenopterous insects.

In Nurata natural reserve 260 registered kinds of vertebrates inhabit. They are 1 type of fish, 3 kinds of amphibians, 21 forms of reptiles, 200 kinds of birds and 35 species of mammals. In particular, among insectivorous animals eared and Brandt's hedgehogs can be seen. In Nurata reserve you can observe the Turkestan rat. Among predatory animals fox-Karaganka and stone marten are widely spread. In the high part of mountain gorges there is wolf, and along shallow streams the steppe cat is met. In the lower areas of the mountains there are badgers and steppe polecats. Of the hoofed animals the wild boar is widespread. 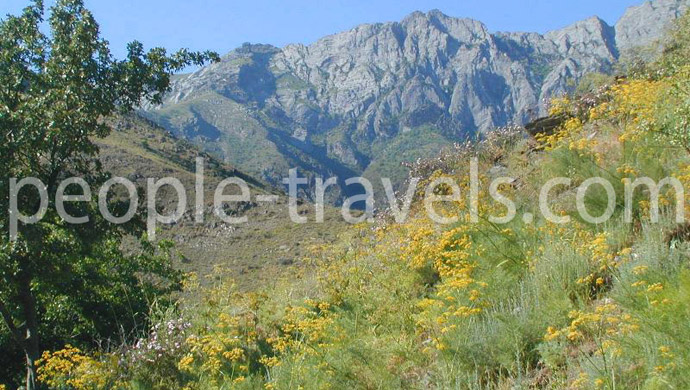 Besides more than 160 types of birds inhabit in Nurata reserve. Fish are represented by only one view. It is an ordinary marinka - widely spread in the mountains of Uzbekistan. Green toads and frogs inhabit in the Fazilman lake.

The largest thousand-year biota grows in the longest stream of Nurata reserve – Madjerum sai. 5 men fit into biota’s hollow. The girth is 8 meters. According to the legend Alexander the Great planted himself the biota above the grave of one of his commanders. Local people believe that this tree has healing properties and even can fulfil the cherished wishes. Not far from the biota there is the age-old destroyed mosque Archa-ata, which is also considered the miraculous place. There is Madjerum Kala fortress, where the archeologists founded housewares dated from the III – IV centuries. 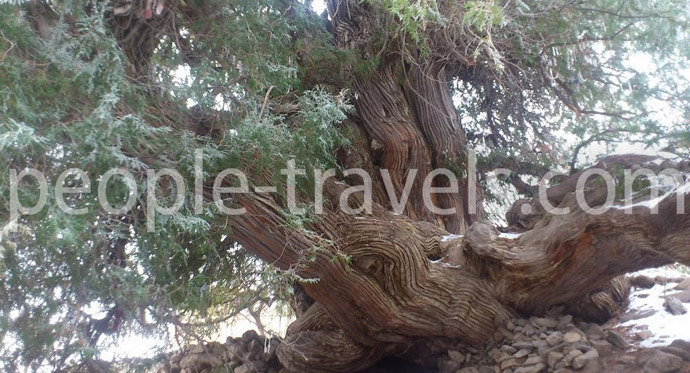 Among natural sights of Nurata reserve there are such places of interest as mountain chain Besh barmak (translated as “five fingers”), Parandas mountain and others. Their beauty is ravishing, charming and even inviting.

The territory of natural reserve in Nurata since long ago had been used intensively by men. Ancient peoples-farmers in the valleys created unique and sustainable anthropogenic landscapes; neighboring tribes of nomadic herders mastered abundant mountain pastures. Plots of land suitable for irrigation, for centuries were opened up by migrants from Samarkand and Khorezm oases under the forest-gardens.

The beauty of Nurata reserve is striking and pleasing to the eye. Nature created here "picture of life", which does not get tired to admire: the picturesque mountain landscape of these places, and hovering over them, light whimsical gossamer clouds on a bright blue sky. And one wants to go farther and farther up the steep mountain paths, climbing higher in the sky, dealing only with the mountains, the sun, the sky, clouds and enjoying a rare singing of flying birds.

You should without fail book a tour to Uzbekistan and visit Nurata natural reserve. The agents of Peopletravel Company will arrange your trip the best way.