The lands of Khorezm were much inhabited. The presence of a large number of cities, villages and settlements of that time was established by archaeological research conducted in 1937, 1940 and 1956.

The surroundings of the ruins of the Kavat-Kala fortress represent a magnificently preserved monument of this era. This is a dead oasis, spectacular ruins of which is a whole settlement, stretching from the ruins of Dzhyldyk-Kala to Kavat-Kala and further to the north about a third of the distance between Kavat-Kala and Toprak-Kala.

This line of takyrs stretching for 15 kilometers along the dry channel of Gavkhore, 2-3 kilometers wide, is completely covered with countless ruins of fortresses, castles and unfortified peasant estates scattered among the well-preserved layouts of medieval fields, outlined by stripes of distribution and irrigation canals.

On a strip of 8 square kilometers immediately adjacent to Kavat-Kala over ninety peasant estates had been registered.

Along the canal around the Kavat-Kala fortress four castles of the type characteristic of this epoch are scattered. These are square fortifications with rectangular protrusions of portals, with pointed arches, with faceted decorative turrets at the corners. The castles are devoid of dungeons; living quarters are located in the form of a carré along the walls, leaving a spacious courtyard inside. The walls of the castle are thin and have no serious defensive significance. In some castles, these walls are covered outside with exquisite carvings applied to raw clay, forming spectacular decorative panels. 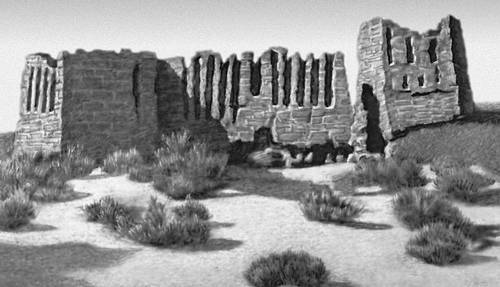 Numerous farmsteads of small landowners and peasants stretched around the castles, bounded by low adobe fences. The estates closely adjoin one another and have irregular outlines determined by the location of roads and aryks (canals). One of the walls of the manor houses a multi-room house with a characteristic layout, living with some modifications in the rural architecture of Khorezm to the present day.

It became known that this settlement of Khoresm - Kavat-Kala existed in the 12th - early 13th centuries. It probably was destroyed as a result of the Mongol invasion.

Currently, the fortress of Kavat-Kala is undergoing considerable research, which requires a comprehensive study in the field of history and archeology.

Being in Khoresm, surely visit Kavat-Kala fortress. Peopletravel tours around Uzbekistan will help you in this issue.