Tash mosque is a unique architectural monument Kyzyltepa district of Navoi region. It is located in the village of Vangazi. This historical and architectural ensemble consists of the mosque-honako, which is called "Tash mosque".

Approximate date of construction of Tash mosque is considered to be the 16th century. Scientists have conducted many studies and excavations around this mosque. Unfortunately there is not enough information about construction of the monument. The mosque is a quadrangular building, surmounted by a dome.

The walls are made of baked square bricks in conjunction with a solution gunch. On both sides of the mosque is surrounded by a gallery in three rows, which rests on brick columns. Spheroconical overlap gallery is based on single thyroid sails. The lining of the large dome is made of square bricks.

The inner part of the mosque has retained traces of the past decoration. On the ceiling there is a semi octagonal niches on the walls were painted fragments geometric ornament on the entrance wall is preserved decorative cornice, located not at eye level man. 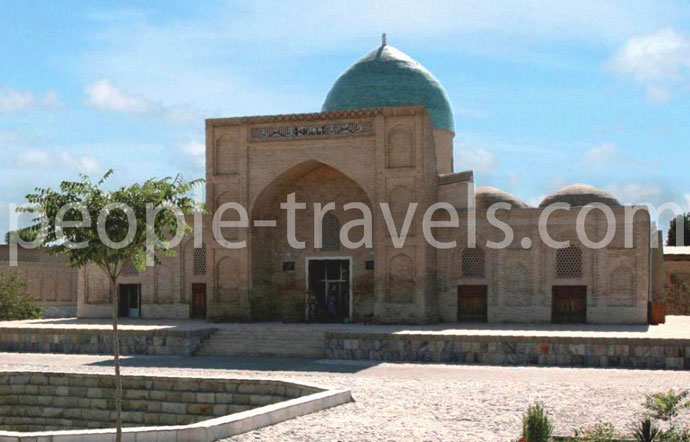 To the left of the mosque is located minaret. This minaret was built in the 18th century and was intended to be for Friday prays. The height of the minaret is 24 meters and the diameter of the base is 3.65 meters. Minaret has round shape and decorated with patterned brickwork. The barrel of the minaret is crowned with a lantern with eight arched openings and stalactites.

According to local residents, earlier in this complex were madrassas, sauna and several hujras. Information about the mazar is missing, but in the 50s of the 20th century, according to old photographs, the mosque was a cemetery.