On one of the routes of the Great Silk Road in Navoi region located caravanserai Rabat- Malik. It was built in the XI century by Karakhanids ruler al-Mulk Nasr ibn Ibrahim. And now it keeps unique archaeological and historical value.

Numerous archaeological works were made in order to restore this masterpiece of medieval masters. This complex occupied space of 100 x 100 m, circled by strong walls and divided into two halves. Entrance portal of 18 meters led to the courtyard square where archaeologists found the remains of dwellings, mosques, baths, economic part, stables for 150 horses. In the south - west courtyard was a mosque, decorated with carved alabaster, colored in blue and yellow colors. 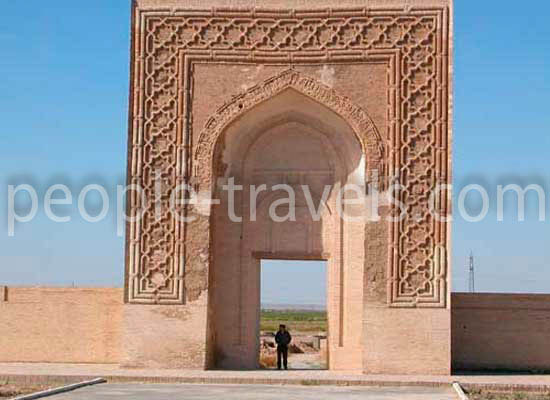 Time has brought to us only pitiful traces of the once majestic and beautiful building in the desert or rather the royal palace fortress than roadside caravanserai. One can only imagine the splendor of the former appearance and Rabat Malik performed with such perfection architects of Maverannahr nearly a thousand years ago.

Today a monument entered in the special literature as one of the masterpieces of medieval architecture in Central Asia. Extraordinary expressiveness of his monumental forms, wealth decorative headdress allowed comparing this palace as the one of the most magnificent monuments of Uzbekistan.