Petroglyph is a carved into the rocks drawing made by ancient people in the Neolithic period. Petroglyphs of Navoi were discovered in the 20th century, and has since continued to be an important subject of study archaeologists.

The problem of dating petroglyphs has not yet fully solved. According to different sources their age is estimated 5-6 BC. It has been estimated that the world's total number of drawings on rocks reaches 20 million pieces, which are concentrated more than 20 thousand sites in 78 countries.

Symbolism in the image body parts of animals and, most often, the horses are cosmic character. These images of animals are often found in petroglyphs of Navoi region. 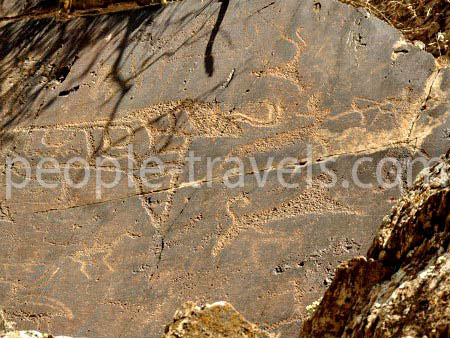 There are many other signs are not similar to known objects. For example, some scientists such figures relate to the type of sun-moon, because they believe that they represent the moon or the sun.

But other researchers believe that the ancient people saw some aircraft and portrayed them. Whatever it was, each pattern has deep sense: these symbols before appearing on the rocks, originated in the minds of people.

Pictures of animals can be considered as a symbolic pointer "astral travel direction"  and at the same time this is due to the daily practice of farmers cultivating their fields, as well as the emergence of the concepts of basic geographical coordinates: noon-midnight, sunrise-sunset. Obviously, that's why on the left side of the cross is located a circle – sign of the sun. 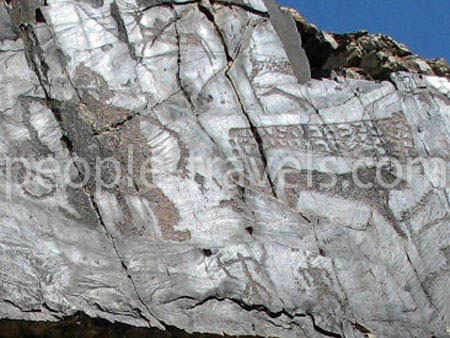 Circular patterns can be understood as an image of the compass or a perimeter defense of animals before attacking predator.

The explanation of some images has not yet found therefore we think deserve attention - it is primarily the image "of the ancient calendar." Greater complexity in the interpretation of the petroglyphs is belonging to the so-called signs of fertility. This can probably be attributed stylized images of snakes, animals and calves, as well as carved with images of pit.