Palace of Culture “Farkhad” in Navoi

Palace of Culture “Farkhad” in Navoi

Peopletravel Company invites you to make a trip around Uzbekistan and see Navoi city.

The palace is situated in downtown. All kinds of concerts, national holidays and other events are held here.

When you come to the Palace of Culture "Farkhad" of Navoi mining and smelting complex, you find yourself in a particular environment. Besides the exciting atmosphere of creativity, sparkling clean and feeling of the holiday, here there is a feeling as if you penetrate into a large family where almost everyone knows each other. The children have a lot of friends, parents got acquainted and feel almost relation. In short, there is always warm, cozy and interesting. 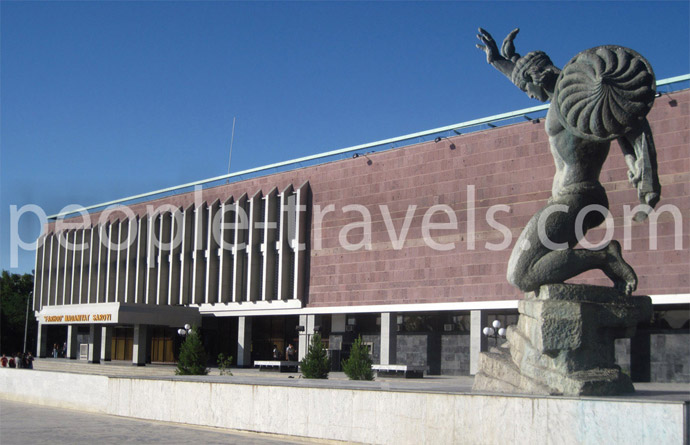 Citizens of Navoi like "Farkhad" Cultural Palace for spiritual development and a rich inner world of children, for the beautiful soul impulses that are born, thanks to a bright palette of creative teams working here.

At present, in the Palace of Culture "Farkhad" in Navoi there are 75 creative groups, in which 1,500 children and adults study. Members of the groups boldly create their elegant "decoration", woven from the inimitable folk tunes, songs and dances, painting, arts and crafts, embodied in the works. They skillfully weave it into the overall fabric of culture of the East. Their creative wealth is open to the world.

During the years of independence the teachers and pupils of "Farkhad" Palace in Navoi by their tenacity and skill won the sympathy of  audiences all over the world: Russia, Bulgaria, Germany, the Ukraine, South Korea, Poland, China, Pakistan, France and many others.

In the Palace of Culture "Farkhad" large and small concert halls, library (for 250 thousand volumes) with a reading room, a subscriber department and the department of periodicals and cafes function.

In front of "Farkhad" Palace in Navoi stands the bronze figure of the athletic young man - Farkhad, the legendary hero of the poem by Alisher Navoi. From the pedestal, as if out of a rock, punched by a powerful blow of the pick, sees the never-ceasing brook of vivifying water. The right hand of Farkhad is raised; a fine face of the adolescent expresses the delight invigoration. Today, the dream of Alisher Navoi, the renowned poet, became a reality.

Navoi is a city of youth and beauty. It extends to expand and develop rapidly.